Share All sharing options for: Know Your Panthers: Radek Dvorak and Keith Ballard

Well into year two of his second stint with the Cats, "D-Vo" began the season on an extraordinarily slow pace, combining for 1g-3a-4p and minus-8 in the first 20 games, giving fans every excuse to toss rotted vegetation in his general direction. Of course, he wasn't alone, as the team in its' entirety sucked, going 7-11-2 in that span. Calls of "trade Dvorak! Trade McLean! Trade _____!" rained loudly from the rafters of the BAC and echoed through the darkest corridors of the interwebs. 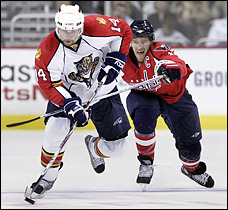 A Panthers run of 13-6-6 down the stretch changed the tune - for now - of fans and naysayers alike, sparked in part by Dvorak's 2g-5a-7p plus-7 over five games in late November. Dual shorties in December were a nice bonus from the slick but aging two-way forward, who's hard work on the PK finally began to pay off.

A well-oiled third-line consisting of D-Vo, Gregory Campbell, and Ville Peltonen became the go-to offensive force for the club, allowing the Booths, Stillmans, and Hortons much more room to manuever (though this did not translate into considerably improved stats for the top line, largely due to various injuries and missed contests). Coach Pete DeBoer continues mixing-and-matching among his forwards, but this triumvirate appears solidly entrenched.

If the line can remain healthy (Peltonen in particular has had a recent rough stretch, and not entirely his fault), the next few months could be particularly productive; if so, there's no reason to believe Dvorak would be unloaded at the deadline as was rumored this time last year.

Just turning the corner at the halfway-mark of his first year with Florida, defenseman Keith Ballard had a rough opening night for the Cats, ending the game pointless with a minus-3. The loss of Bryan McCabe that very evening, and Bryan Allen the next day, paved the path for Ballard to spend far greater quality minutes on the power play and up front in general. He went on a tear, scoring 1g-4a-5p in the next five nights. 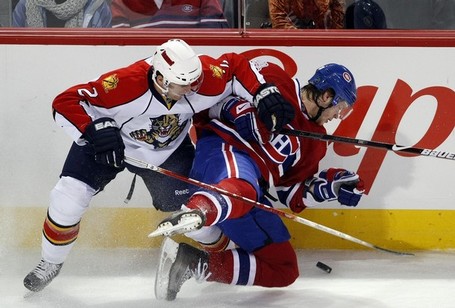 Primarily playing next to longtime linemate (and fellow Phoenix refugee) Nick Boynton, Ballard brings the offensive touch to his duo, while The Beach, though no stranger himself to jumping into the play, hangs back. The line isn't a particularly dangerous scoring threat, but Ballard's ability to "Bouwmeester" his way deep into the opposition's zone while beating defenders with his speed, allows Florida to set up and press the play.

His bone-crushing hip-checks have already become legend not only in Sunrise, but among the Eastern Conference. Always a blast to watch considering the "I didn't just see that" factor. Durability has so far not been a concern as he's played 46 games - all the more impressive considering his rough-but-calculated style.