Panthers can't stay out of the box, drop third straight

Share All sharing options for: Panthers can't stay out of the box, drop third straight 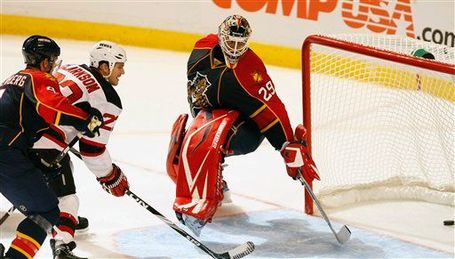 For a team who stressed the importance of starting the season on the winning side of things, they sure aren't playing like it.  Despite a closer score on Saturday then on Friday, the Panthers played two games in two days and got spanked in both.

The Cats did get off to a fast start against the Devils, but that abruptly ended.  After registering 3 shots in the first few minutes of the game, the ice seemed to tilt towards the Panthers defensive zone for the remainder of the game.  At one point early in the 2nd period the Devils were outshooting the Cats 23-4.

Peter DeBoer showed little patience for the lack of offense and was swapping linemates throughout the game.  It seemed the Cats had pulled out a little Opening Night magic when Steven Weiss scored on an amazing individual play to tie the game at 2 late in the 3rd, but unfortunately that ‘Panthers mystique' caught up with us.

Michael Frolik was called for his 3rd penalty of the night shortly after Weiss' goal, and it took the Devils only 42 seconds to re-take the lead.  The puck never left the Cats zone during that sorry excuse of a penalty kill.

Last season the PK was a great component of our team, but this year that is not the case.  The Panthers have killed off only 70.6% of their penalties (23rd in the league).  Not to be outdone, their power play has been even worse.  The Weiss goal last night was their first on the PP this season, but the Cats are still ranked dead last in the league with the man advantage (6.2%, 1-for-16)

Alright enough with this weekend of terrible hockey.  Things will get better; it's just a very frustrating way to start the season.

Everybody enjoy your Sunday!