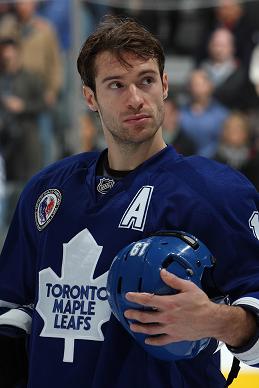 Newly-signed Panthers center Dominic Moore was finally on South Florida ice this morning following immigration issues which held up his arrival for a longer-than-usual period of time. Pencil him in for the third line, joining wings Radek Dvorak and Rostislav Olesz. Gregory Campbell will most likely take up residence on the fourth triumvirate with Kamil Kreps and natural D-man Ville Koistinen, who has covered the forward spot. The move allowed for Shawn Matthias' demotion (as such) to Rochester. Take heed, though:

(Coach Pete) DeBoer spoke a little bit today about the ineffectiveness of the second line. Michael Frolik has played better than Reinprecht and Cory Stillman, but as a whole the line has been subpar. One interesting note: DeBoer said Moore is capable of playing on the Panthers' second line and that he considers every forward spot up for competition below the top line of Horton, Stephen Weiss and David Booth.
- South Florida Sun-Sentinel's Steve Gorten (and a wealth of solid stuff from practice is included)

Just what does Moore bring to the club? A lot has been made of his faceoff prowess, and perhaps rightfully so: in 63 games with TOR last year, he placed second on the team among those who played more than 60 contests. (One could focus on his short stint after the trade deadline with BUF as a potential harbinger of things to come, but 18 games with a new team and unfamiliar surroundings do not a player make. Argue it in the comments.) He banged out a 54.8 winning percentage in the category, which crushes all Panthers from that year - by a wide margin (Stephen Weiss led Florida with 50.9%). On a club gasping for faceoff wins, this can only be looked at as a very nice addition.
His 41 points (again, in 63 games) slots in between Michael Frolik (45 points) and Dvorak (36) among forwards...and of the two only Frolik is listed as a center, though he played a bundle of shifts at wing. Take him out of the mix, and former (indeed, future) linemates Weiss and natural-winger-turned-center Nathan Horton were the only two from the middle spot to score higher. Granted, we're not talking Gretzky/Messier here, but it's what we've got.
Statistically, there's nothing flashy about his numbers, but that faceoff percentage should stick out like a hammer-battered thumb on a team of collective faceoff retardation. Anyway, here's his first "GrowlTV":