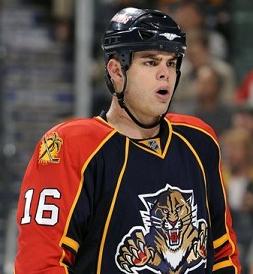 In what's become a semi-annual event in Florida, enigmatic winger Nathan Horton finds himself once more as the focus of trade rumors, courtesy of Bruce "Malkin to the Kings" Garrioch:

The Panthers are trying to move C Nathan Horton, who is off to a bad start, recording just two goals in the first six games while posting a minus-6 rating.

We'll excuse the listing of Horts as a center, being that it was his position last season. It's only one line, and doesn't begin to specify which clubs - if any - are actually interested, not to mention whether there is any truth to this whatsoever. I find it hard to believe Panthers assistant GM Randy Sexton is prepared to throw in the towel after a handful of games (especially in light of Horton's entire trio - including C Stephen Weiss and W David Booth - facing similar struggles). Evidently, Spector agrees and finds #16's contract status to be a deterrent:

Horton is currently in the third year of a six-year contract paying $4 million per season, which could be difficult to move if the Panthers indeed were to put him on the market. While his struggles date back to last season Horton is still young (24) and has the size and skills that could tempt another team into picking him up. That being said I don't see the Panthers giving up on him yet unless ownership orders management to dump salary.

If one is to single out Horton by using the new season's numbers as backup, then a brief look at his linemates' stats is only fair:

Neither guy is exacly propelling the Sunrise Express into high gear, though four points in six games is precisely what Weiss should be averaging. All three are in the Florida top four in SOG, and somehow Booth finds himself fourth on the team in PIM.

Has the line simply not yet found their groove, or is a shakeup really in order? In any event, few Cats fans were dishing out profanities after this bit of late-period heroics Friday evening: