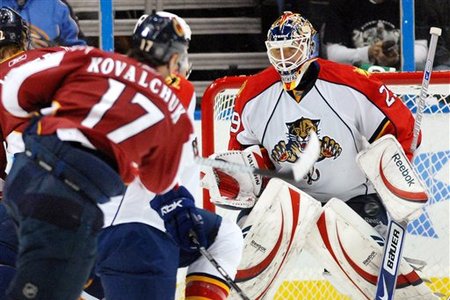 Whatever your feelings on Panthers goaltender Tomas Vokoun - now in his third year as a Cat - one has to be mildly amused at ex-Tampa Bay general manager Jay Feaster's comments published today at THN.

Feaster, Bolts' GM during their Stanley Cup run of 2004, let it be known the Lightning's scouting staff was "not sold on Vokoun’s ability to win a championship" nor "thrive under big-game pressure and his contract was too rich for [Tampa Bay], both in real dollars and available cap space" when the 6', 205-lb Czech was offered by Nashville's David Poile prior to the 2007 draft.

Perhaps those indeed were the parameters by which the Lightning organization was measuring Vokoun, and it's nothing short of incredible that T-Vo was not considered an upgrade over every goaltending prospect the Bolts may have had their collective eyes focused on at the time, but it doesn't take an ex-GM to see the this writing on the dressing room wall (again, from Feaster):

"Not surprisingly, Vokoun has faltered and the Panthers find themselves desperately needing help from their backup goalie yet again. The only way for Florida to climb back into the hunt is for [Scott] Clemmensen to do for his current squad what he did last year in Newark, and time is of the essence."

For the record, Clemmensen is starting in net Wednesday evening against Buffalo.