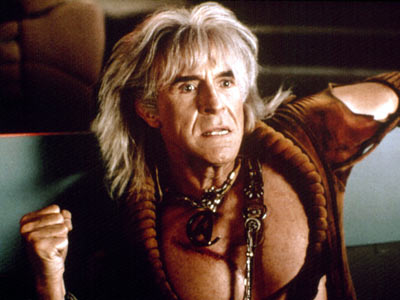 Panthers win! If one leaves out the first period...oh well...if you've got to fall, make it hard.

Buffalo earned this from the start, chasing Scott Clemmensen at the 1:56(!) mark of the first period, off goals by Mike Grier and Jason Pominville (PP, ). Enter Tomas Vokoun; clear skies?

Not a chance: Matt Ellis and Tyler Myers continued burying regular-strength pucks until Steve Reinprecht's backhander at 14:11 from Michael Frolik and Rostislav Olesz cut the lead to 4-1, but the damage was done.

Well, not quite: Buffalo's Thomas Vanek, the Sabres' leading scorer from a year ago, was obviously feeling lonely. His goal at 16:48 lent proof.

The second period was a far different arena; the Cats had some pluck, but no one was getting the better of Buffalo's Ryan Miller (41 saves). Not nearly the train wreck of the first, Florida had a targeted sense of purpose, but the Sabres were able to stifle any semblence of a comeback. Hats off.

Cue the third, and other than Nathan Horton letting the faux trade rumors get the better of him, it was more of the same. A late goal by Olesz, assisted by David Booth and Ville Koistinen, did nothing to change the outcome. Horton, however, became the consummate Team Guy, taking on Patrick Kaleta, not once, but twice; upon the end of the primary penalty, Horton decided to Make It Count, getting tossed in a meaningless blowout.

NOTES: Yuck. This was disgusting. Embarrassing. Where to go from here? We discussed a few different possibilities in the live blog this evening, but ultimately, who should be called on the carpet? When does Pete DeBoer and his coaching staff take responsibility for the mess that Florida finds itself in? I remain convinced he's The Man to deliver the Cats to the promised land, but it's been a long gestation period. He wasn't here for the nine years previous to his arrival, but the club has looked woefully under-coached. There has yet to be a game this season which the Panthers have earned from the start. Can't win much that way, or so a manual I read told me.

Whatever: nicely done, Sabres. You made this one suck with a capital "S". Two points.