Share All sharing options for: Need some good news, Panthers fans? Try this... 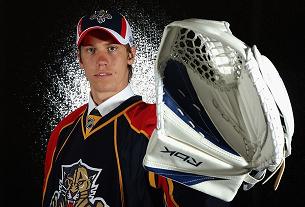 Hockey's Future - the first and last word in puck prospects - has released their Organizational Rankings for Fall of 2009, and Florida places higher than ever ever before. Of course, we knew they would, but still.

Seriously, Hockey's Future is mighty impressed with what the Panthers are - with all respect to Rochester/Estero/Etc. - growing down on the farm. Maybe even a tad enamored with what GM Randy Sexton has done the summer.

According to HF editor Ian Bross, it's Florida's highest appearance ever - organizationally speaking - on their list (you may unclench your fists now, fellow Cat fans...nothing negative this time around). Who's number one in the organization? Goaltender Jacob Markstrom, followed by some kid who will play tomorrow on D for the Cats.

Head over and enjoy.