Share All sharing options for: Cats fall in 'home' opener, blanked by the B-Hawks 4-0. 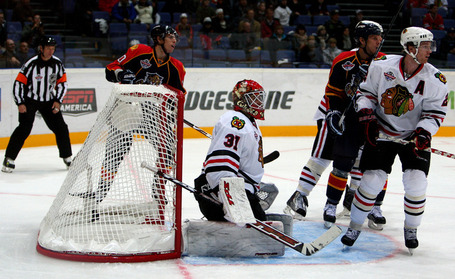 My feeling from the beginning was that if the Cats could get out of Finland with 2 points, it would be a successful trip.  The Blackhawks were one of the strongest teams in the West last year, a conference finalist, and very young...so you could expect them to be even better this year.  But then the Panthers played an ultimate game of catch up during game 1, and stole 2 points right off the bat.  By no means does that mean that game 2 was a giveaway...although judging by the way the Panthers played today, maybe they had a similar feeling as I did.  "Alright, we got 2 points, lets go home".

The Blackhawks outplayed the Panthers in every aspect, although you might be able to say that Vokoun outplayed the Hawks young Finnish goalie, but that's only due to how poorly the Panthers played in front of him.  I realize that he lets in some very crappy goals, but he also makes a ton of saves and is usually pretty good with rebounds.  Nobody is more critical of goalies then I am, but this isn't the time to jump on Vokoun for poor play.  Team D was just horrid today.  Its' funny that it was actually better on Friday when we gave up almost twice as many shots.  Oh the irony of hockey...

The 1st period set the tone for the game, as Chicago was just simply putting 2 guys on the puck in the defensive zone and the Panthers looked like a junior hockey team, unable to do anything but turn the puck over in the offensive zone.  Their neutral zone play was not much better as I constantly saw guys bunching up.  Chicago just used their speed to beat the Panthers to the puck, which led to several lazy penalties by the Cats.

Keith Ballard looks downright awful.  I counted at least 3 times during Game 1 that he was caught up ice that cost the Panthers an odd man rush, and sure enough he once again was left behind in the neutral zone, leading to another Chicago 2-on-1 and their 1st goal of game.   Then on the Hawks 3rd goal, he was the lone guy back to defend the 2-on-1 but looked lost, getting spun around and allowing the cross ice pass through the slot leading to Patrick Sharp's goal.  We know how good Bally can be, so hopefully this was just an early season fluke and he'll get back to his normal self once he's back on North American soil.

Did you notice that several of our guys got lit up with big hits?  That is what happens when your positioning is so poor that you are constantly looking around, leaving yourself wide open for a big check.  I think Rusty Olesz got the worst of it this weekend.

Our top line...did they play today?  I hope it doesn't take long to get Horton off of that crew.  Weiss I don't mind because he does a good job of setting things up and has improved each of the past couple seasons, but Horton just makes me angry.  It could be that his style of play makes it looks like he is never giving full effort, but come on dude.  If what I saw in the preseason and these first 2 games is any indication, its time to trade this guy before the secret gets out that he is as hockey smart as he looks.

Bright spots?  Sure!  The new guys on D are going to prove to be solid.  Seidenberg will be a guy we'll grow to love, as most of us Panther fans grew to hate him in Carolina.  Leopold has shown some good defensive skill, and I like his toughness along the boards.  Both move the puck well and seemed to handle controlling the point on offense.

Our 3rd line of Dvorak-Campbell-Olesz is looking great.  They generated some of our only offensive chances today.  I loved the old CPR nickname, but Olesz is doing a great job of taking over for Peltonen, so hopefully we'll get an equally good nickname for the equally good line.

Brian Allen is looking good, never really getting caught out of position, and made a nice diving poke to kill a Chicago odd-man rush.

Anything I missed?  That's what the comments section is for!  And I'm sure the Whale-man will be adding his thoughts sometime tonight, so don't fret.

Overall, we got 2 points out of 4 against one of the better teams in the league.  I'm still standing by my prediction of at least a 6 seed.  Let's start playing some games against the Eastern Conference, please.   Oh, and to agree with Whale-man, Vokoun's new pads are pretty sick.  (Insert sarcastic, ‘looks over use' joke here).