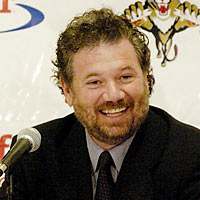 A banner moment may be on the horizon for a sizeable number of Panthers fans who have grown weary - or worse - with the perceived ineffectiveness of Cats owner Alan Cohen, if a story posted late Friday night at the Miami Herald has any legs. Serious props to the Herald's Barry Jackson for the info.

Here's the short, short version (keeping in mind the number of "sources" involved, any other approach would turn this into a novella):

Viner and Siegel have been around the team a lot this season, and Cohen has been around much less than in past years.

My take? A change at the top can't hurt. I've never had it in for Cohen, though I do understand fully the frustrations of those who have called for his head on a platter the better part of a decade. "AC" doesn't play the game, doesn't run the scouting staff, doesn't trade or draft assets, and doesn't pick his friends very well. Of course, all of that is to be led with the word "presumably".

Got to give the guy some credit, for if nothing else he's pumped a whole lot of coin into keeping the ship afloat, even if it turned out to be polishing the telemotor when the hole in the stern should have garnered the lion's share of attention.