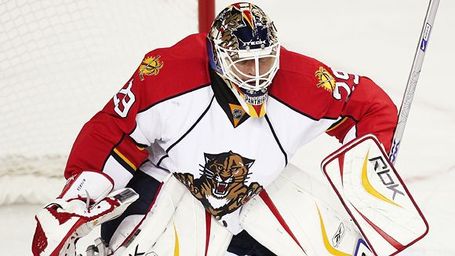 Sure, the timing is a little odd, but that's what the 6 days in between games is good for.  Panthers coach Peter DeBoer announced on Wednesday that Tomas Vokoun will start both games this weekend (Friday night in Carolina and Saturday's home opener against New Jersey).  For those keeping track, that's back-to-back games in back to back weekends.

This situation should be nothing new to Voky, who did the 2 start/2day dance 5 times last season.  In those 10 games he had a 4-4-2 record, with both single point loses coming via the shootout.  Interestingly enough, he struggled in the first of the 2 games, going 1-2-2.  Still, he got the Panthers at least a point in 6 of the 10 games.

Dominic Moore is having visa issues and has not been able to join the Panthers for practice.  The team is still hoping he'll be able to meet them in time to play tomorrow in Carolina, and DeBoer has said that Moore will play whether or not he is able to practice with the team.

Until Moore can hook up with the Cats, Ville Koistinen has been skating on the wing of the 4th line with Kamil Kreps and Gregory Campbell.  Hopefully Moore can join us by Friday, as his presence in the lineup makes 2 of our lines much better.

Steven Reinprecht was hit in the foot with a shot during practice on Wednesday causing him to leave practice early.  He returned to practice today after X-ray's revealed no breaks and is expected to play Friday.

I don't know about you guys, but I am getting pumped for a weekend chock full of Panthers hockey!!!!