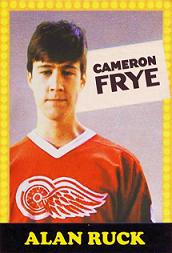 You made me make a phony phone call to Michael Babcock???

Despite the Cats' recent successes of late (winning six of nine, for starters), here are the numbers which strike fear in the hearts of anyone who may be questioning the decision to feature Scott Clemmensen in net this evening:

This is not, however, the same Panthers club which opened the season in a dreadful downward spiral (if there's a way to fall to "less-than-zero" status, leave it to the Cats to find it). All of their offensive and defensive stats are improved over the past two weeks; has the leak been plugged?

Anyway, Clemmer and Chris Osgood get the nods for their respective clubs. Christy at Winging It In Motown's got the home squad covered, and please do check them out.