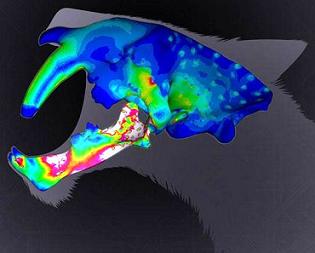 Nashville's new secondary logo has been greeted with mixed reviews from fans (though it continues to poll rather well among veterinarians).

On The Forecheck * Cats at Preds GameDay Central * TSN Preview

A matchup of felines tonight, as the Panthers visit Nashville's Predators, which presumably references some sort of prehistoric cat.

Tomas Vokoun? Scott Clemmensen? For that matter, Alexander Salak? Numbers aside, goaltending wasn't the overarching cause of last night's headaches, so what's a coach to do?

No better time than the present to begin another serious point streak; with luck - and several fewer mental lapses than were witnessed Friday - the Cats (Florida's...not Tennessee's) can get it back on track. After all, they're on the road, which has been rather kind of late (7-4-1. Yes, the Panthers).

Nashville suffered a home loss less than a day ago as well, falling to St. Louis 3-1. Dave Scatchard scored the lone Predators goal, while Jordin Tootoo (1 assist, 1 sog, -2) was named third star of the game. Huh?

The Forechecker's got the locals attended to at the wonderful On The Forecheck, which routinely carries far more than just Preds news. Without question worth a daily visit.

As always, thanks for coming by. Go Cats (um, the Sunrise variety).