Share All sharing options for: OPEN THREAD: Capitals at Panthers 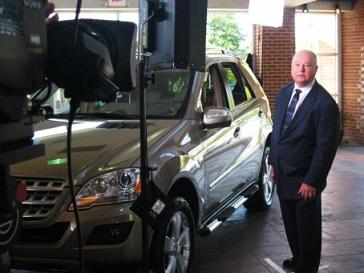 As do many of us, Coach Bruce finds cameras and lighting equipment following him into car dealerships to be intensely annoying

The Cats go for four in a row tonight (yes, wins), hosting the Ovie-less Caps in the front end of a weekend home-and-home. Gotta admit, Florida's lucking out with the opposition's star players getting whacked (see Staal, Eric).

It's getting pretty late in the afternoon (just an hour before the puck drops!), so here's The Story So Far: SSE and Panthers COO Michael Yormark bagged himself a pretty big fish, sponsor-wise; hope you won't miss the UFO-style seating. Alexander Ovechkin is indeed out of the 2-game series, which concludes tomorrow at Verizon Center in D.C. Bryan McCabe will play in his 1,000th NHL contest tonight; flowers and notes of good cheer from former fans in Toronto continue to flood the BAC mailroom. Caps coach Bruce Boudreau on Ovie's absence:

"Offensively you can't rely on one guy all the time, but you're taking a full goal a game out of your lineup."

Cutting it real tight now, so off we go with Three Questions:

JP and his loyal minions are gathering at Japers' Rink, and they may well be ornery. Go Cats.