Panthers' Jacob Markstrom -still- not an option this year

Share All sharing options for: Panthers' Jacob Markstrom -still- not an option this year 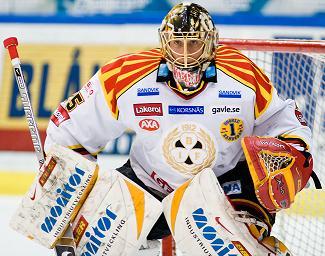 Been a lot of local talk about Florida's presumed goaltender-of-the-future Jacob Markstrom, given the ridiculous recent speculation regarding Tomas Vokoun being shopped (too early...too early...too early...). "T-Vo" may indeed be on the block, but a deal anytime prior to a few weeks ahead of the trade deadline will signal a blow-up-the-team approach, which this organization - awash in empty $10 seats - can ill afford. But that's a story for another day.

Playing in Europe, Markstrom rarely gets a whiff of press on this side of the pond, but his presence - and potential - is never far from Panthers fans' minds (though this gem could probably stand to be retired).

The first pick of the second round in 2008 (thanks to our friends in the Tampa-St. Pete metro area; how's Chris Gratton working out for ya?), the 19 year-old has a boatload of international experience, and considering his current numbers on a sub-par Brynas squad (1.99 GAA, .927 Save %) it's difficult to ignore what he may bring to the NHL.

Of course, the league and its history are strewn with the bodies of "can't miss" goaltenders, and Florida is playing it very close to the vest with this one: they speak in hushed tones, never revealing expectations or displaying an arrogance over the "crown jewel" in their system. A Seen Markstrom?-style campaign is definitely not in the cards.

And for the last time: he won't be in a Panthers sweater (or Rochester, or Everblades) until summer at the earliest; in a remarkable display of character seldom witnessed in recent years, he's honoring his existing contract. A Clemmensen-Markstrom duo is not on the horizon in for the remainder of this season.