Forbes to Panthers fans: You Suck

Share All sharing options for: Forbes to Panthers fans: You Suck 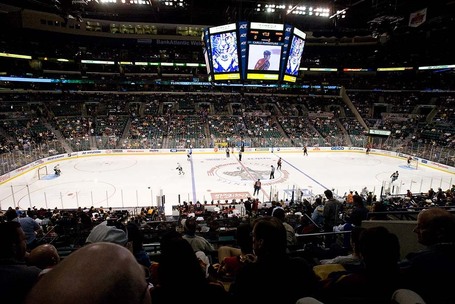 Our society tends to place a high priority - or at the very least an engineered interest - in lists. Ten Best Songs, 100 Most Shocking Hollywood Crimes, 50 Funniest Movies, and so forth. I first noticed the trend's genesis around the turn of the century, when everyone from your local newspaper (remember those?) to VH1 and their horrid, shameful transformation into a televised version of Us Magazine teased our curiosity, making couch-bound voyeurs out of anyone with a remote control and a little free time.

The "list" craze continues full-force - just turn on the flatscreen at any given hour - with no sign of abating. They're admittedly fun, they poke at our past, and tend to keep our attention while forcing your brain into no further action than simply ticking over.

Forbes, "Home Page for the World's Business Leaders", has compiled what they are referring to as The NHL's Best (and worst) Fans. It's not stated which of the world's business leaders might be interested in such an exercise, but nevertheless...Sir Richard Branson will sleep more soundly after having been informed of the Minnesota Wild's fifth-"ranked" fanbase.

The Florida Panthers, perennial home of questionable trades, a history of lousy draft picks, and stuck in a market featuring endless entertainment options, have shockingly been proclaimed as possessing the NHL's worst fans.

The evidence for such a scolding?

Despite finishing last season with their second best record ever (41-30-11), the Panthers failed to qualify for the playoffs for the fourth straight year since the lockout. Fans didn't settle for mediocrity. The team had the worst TV ratings and second worst attendance in the league last year.

Quite obviously, this wasn't utilized in our defense.

Numbers can't be argued with, so a childish he said-she said cannot be employed, but as a Panthers fan, do these silly lists even bother you any longer?

To be a fan of this club is to proudly sport chainmail and moon boots: the armor protecting your fleshy areas from ignorant ridicule, the footwear for traversing endless miles of BS laid in our collective path.

Year after playoffless year, the dedicated base of several thousand continue to show up, tune in, and care. What more can be asked?

By the way: followers of the Penguins were judged to be the "best" in hockey. Wonder how they might have fared in the same list about five years ago...

Thanks to GW at Puck Daddy for the heads-up...