South Florida: You do have hockey here, right?

Share All sharing options for: South Florida: You do have hockey here, right? 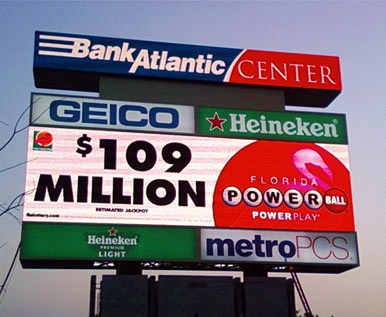 Once more...who plays in this barn?

The only sign that I have seen that the Panthers actually exist is a billboard on I-95 near my hotel. We took our kids to Sawgrass [Mills] Mall yesterday afternoon and despite the fact the arena is "around the corner" we saw no evidence of a team. I went into 2-3 sports stores and found no Panther items for sale.

I have commented previously that even the TyrannoVision electronic marquee outside the BankAtlantic Center (on the Sawgrass Expressway, not the one referred to in the post) has not a single fixed graphic of any team being housed within. Bad move. How in the name of Huizenga was that possibly overlooked, or worse, deleted?

Are we Panthers fans simply blinded to, and more importantly don't care - what media from established hockey markets keep ramming down our collective throat: the Cats have no obvious first-glance visual representation in the area, so they must contribute nothing to a region which displays no interest?

I'll be the first to jump all over local television and radio sports "coverage": it is indeed nonexistent, but quick on the draw when a player's throat is slashed or your goalie becomes a victim of fratricide. Only in such cases are the Panthers deemed relevant for consumption by South Floridians.