Share All sharing options for: Reviewing the Panthers: Top 10 Media Moments of 2009...Part 1

Lists, lists, lists. It's all we care about any longer, if VH1 has a role in shaping our opinions. And sadly, they do.

We'll keep the intro thankfully short, as The Box counts down our Top Ten Media Moments Which Define Florida Panthers Hockey in 2009 (or "T10MMWDFPH2k9" in the spirit of Kentucky Fried Chicken's early-90s sellout) for the soon-to-be extinct calendar year. This here be episode one; with any luck we'll have covered a vast majority of the "illustrious ten" by March, at which point the Cats will be a shoe-in for the Eastern Conference crown.

The remaining episodes will conclude on Friday, so stay tuned.

There was no polling, little open-mindedness, and a complete lack of respect for anyone with a grounded-in-reality take on the outgoing year. It's all me - Whale4ever - so throw the brickbats in my direction. And we welcome

BTW: there is no particular order for any of this; feel free to take it upon yourself to label/deconstruct these as you will in the comments area.

Panthers name Randy Sexton as general manager: not much of a surprise whether it took place on the opening day of the latest season or not (it did), Sexton - a Jacques Martin hire in 2006 - has been-there-done-that for decades, and lords over one of the best scouting staffs in the majors. Essentially taking the reigns upon Martin's decision to drop the GM title to coach once again (even forgetting the Habs were JM's boyhood club, what does that say of the general manager's position with the Cats?) Sexton has towed the line paved by his predecessor, but going a step or two further by solidifying Florida's relationship with the Rochester Americans of the AHL while acquiring character such as Steven Reinprecht and Jordan Leopold. A certified "capologist", Sexton remains one of the few old-liners unwilling to blow up a team simply to win a few games in the short-term. W4E at the time: Thumbs up. 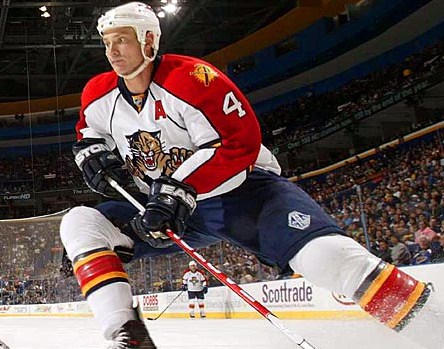 Jay Bouwmeester and the Deadline Day of Doom: As general manager, Jacques Martin was allegedly many things (friend to ex-owner Alan Cohen, friend to captain Olli Jokinen, friend to whatever Mike Keenan may have been), but of all the hats he wore, none were more historically lasting than the one he plopped aboard his perfect hair on trade deadline day 2009. Transport: February 2009...Florida was winning with Jay in the lineup. Bouwmeester was The Prize and in the end, GM Martin was unwilling to let him go for what he saw was an unfair take from predatory clubs such as Eastern Conference foe Philadelphia. Ultimately, Florida lost the gamble taken by a general manager with one foot and nine toes out the door, as Bouwmeester lost any interest in assisting Florida with a playoff run. The Cats missed the postseason by the thinnest of margins, Martin begged for and was named head coach of the Canadiens, and Jay (2 points in December, $6.68M cap hit) can enjoy his homeland without the sturm und drang of fans beating down his door. W4E at the time: Thumbs up. 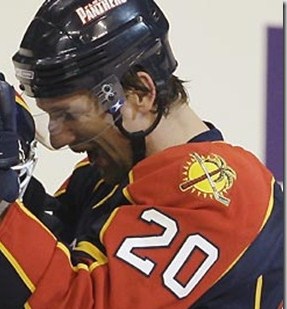 Richard Zednik heads to Europe: The entire story hasn't made it's way out, but whether it was money or, well, money, "Zeds" was dropped, most likely in a cost cutting move. We've all moved beyond the corotid madness he shared with us - and the world - in February of 2008 during the worst evening anyone could have envisioned. Moving along, sure, he didn't have the speed or hunger we've grown to expect from guys hanging on to a spot while approaching thier mid-thirties, but just try to top this or this. W4E at the time: Thumbs up.

Next three up tomorrow.