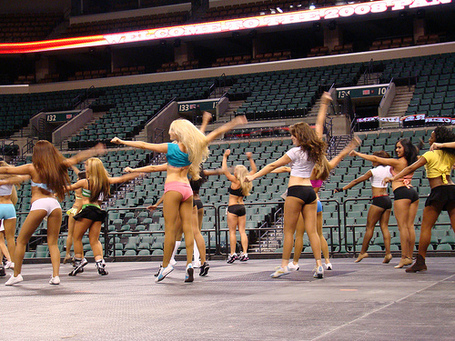 What more can I do but post happy pictures? Here we witness the Panthers Puck Bunnies Ice Dancers practicing at the BAC.

A solid game, at least after the second period for the Cats, before Ovie decided to turn it on and hammer home a hat trick (which included an empty-netter).

Michael Frolik opened the scoring for Florida, but Tomas Vokoun, mostly on his head for a good portion of the game, just didn't have enough support.

Can anyone stop this Ovechkin dood when he's "on"? When is the last time the league has seen a guy like this? Lemieux? All in all, we're lucky to be hosting him three times per year. Unreal, but the Panthers must live with him, and learn to defeat him in order to gain access to that Holiest of Holy places: top three in the conference.

Bottom line: the Caps played Caps hockey, and the Panthers were not ready. It was seriously that big a difference. Got a long way to go, peeps. A great game, and a mammoth comeback, but the good teams find a way to win. And this one did. Couldn't save it for overtime...had to nail it in regulation. Bah.

We weren't going to win them all. Learn from it and carry on. It really isn't a case of severe depression. Get it going on Tuesday.