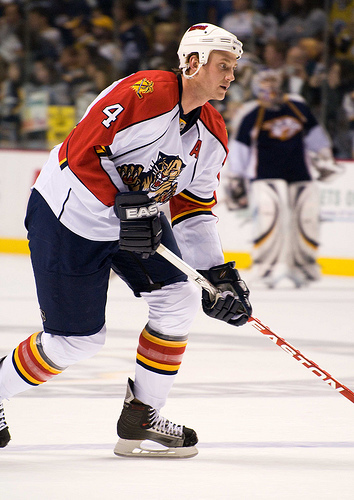 Wanted to take a peek at what the undisputed number-one target on deadline day has on his resume for this year:

Not shabby, but the minus-2 and sub-half-point-per game didn't astound anyone, even considering how wretched the team was in the first six weeks of the season.

Behold the light switch toggled to the "on" position. Monster plus/minus, huge improvement in PPG, and a far more balanced offensive output, with an equal number of goals in half the games.

Jay has always started terrifyingly slow, yet consistently picks it up in January. As he goes, so go the Cats: year after year Florida's play - and points-accumulation - trend upward after New Years' Day.

The past few seasons, under former coach Jacques Martin, Bouwmeester - along with the rest of the club - was hamstrung by a tight defensive system, which ultimately proved unsuccessful in the wide-open offense-first NHL. The entire roster, most notably skill and speed players such as Olli Jokinen, Nathan Horton, and Rostislav Olesz, and especially Jay, were tied to posts, unable to utilize their talents up front, forced into a "defensively responsible" unit which never quite worked.

What a difference a year - and a coach - make. Pete DeBoer has unshackled his forwards, and perhaps more importantly, his defensemen, and the results have been - again - trending upward. Chalk the similarity up to learning/embracing a new fast-attack, first-pass-out offensive system, which benefits a Bouwmeester or Keith Ballard in a tremendous way. Don't expect that first-half death-spiral next season from Bouw...if he remains a Cat. This is a completely new team from past seasons.

Simply watching Jay this year has been a pleasure. His uncanny ability to pass, his mobility, and that astounding vision have coalesced into a true "fourth forward" for the club. Anyone who catches the Panthers regularly has seen the metamorphosis.

I sincerely hope he stays, but whomever ends up inking him to a mega-buck, long-term deal will be presenting their fans with quite a gift.