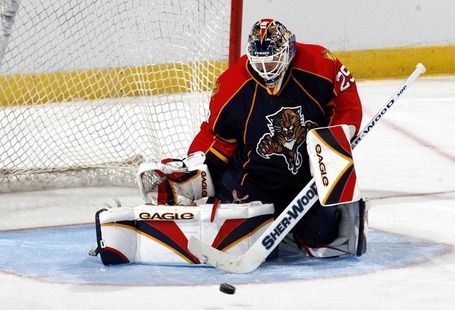 T-Vo strikes a pose and scoops his fifth shutout of the year for the sixth-place Cats.

Tomas Vokoun had yet another statistically perfect evening, playing his role to the nines, earning a 36-save shutout victory over the previously surging New Jersey Devils in Sunrise. Any casual observer would agree many of the unscheduled acrobatics T-Vo wound up performing were of the "how'd he possibly do that" variety, and you know your goaltender is making a statement when even non-hockey fans are drawn into the game, as was the case at my humble abode.

Vokoun was named one of the NHL three stars of the night (Seen Stamkos? Yep...his three goals placed him there as well) and earned the coveted second star at Puck Daddy. Lofty heights, indeed.

"Confidence" was never synonymous with the Panthers in the past decade, but one viewing of the game highlights (and there were many more than what is on display here) has Florida fans daring to utter the "C" word again.

Not to leave out any of the other major contributors to this win, but honestly it was a complete team effort, from the coaching staff on down the roster. This was not a case of New Jersey not showing up (Parise had 10 shots, Elias 5!); the Devils were quite simply outclassed, outplayed. I didn't see the NJ/SJ game of a few nights ago, but if the Devils club who beat the Sharks was the one on the ice at the BAC last night, we've got something special happening down here. Can they keep it up? Will DeBoer continue to find new ways to motivate his troops? And what impact will the Bouwmeester situation (two weeks and counting) ultimately have on this team down the stretch?

Celebrations are becoming a nightly event at the BAC.

Stillman (1g), Horton (1g), Weiss (1g,1a), and Zednik (1g, 1a) were the major supporting players for the Cats, while David Booth (2a) continued his recent tear. Michael Frolik was not left behind, grabbing two assists as well. Radek Dvorak, somehow held scoreless, managed six shots on goal, a team high. 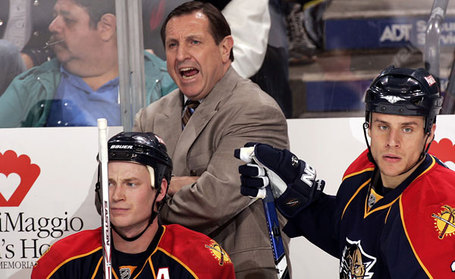 NEXT UP: Eastern Conference Combat for Wednesday