Share All sharing options for: Despite Vokoun heroics, Blackhawks and Huet smother Panthers 4-0 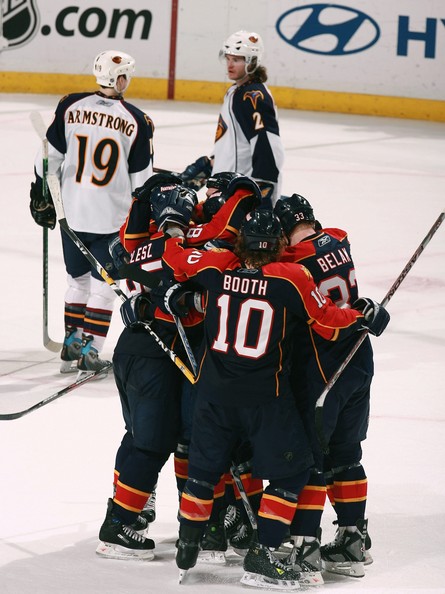 See this image? Makes you want to cheer, right? Nothing even remotely resembling it took place at the BankAtlantic Center on Thursday.

Got walloped by a very hungry, very skilled, very good Chicago hockey team. Get the crying over with now. Cuz it won't matter on Saturday. BTW: less than 1,000 tickets left for the Broons game. Snap 'em up, and get your inner-Brass Bonanza on. Simply because we hated Boston. And Neely. And Wesley. And Bourque. And Janney. And Ruzicka. And so on...

It was pretty obvious right out of the gate who wanted this one more. A truly complete club, Joel Quenneville's Blackhawks gave up very few opportunities for the Panthers to jump on. And speaking of Coach Q...what a move by Chicago to bring him into the fold. Talk about perfect timing. I hear Denis Savard is available for comment or wrapping of fish... Kinda feel bad for the spin-o-rama master. He was truly sick in NHLPA 93.

Buy it the day it was released? W4E did. No team nicknames, but the blood ran unobstructed for our impressionable minds.

Goaltender Christobal Huet (obviously Irish) had his A+ game in effect, and Ben Eager was a gamebreaker...twice.

Tomas Vokoun was cherry, perhaps not as much as the final score reflects. Throw the empty-netter into the mix and his numbers over the past two weeks are still more than respectable. Let's be honest: the Hawks owned this one from the start. Missed passes, blocked passes, intercepted passes. This game was all of the above. Chicago's troops were everywhere, shutting down all the lanes effectively.

Nathan Horton's image will be haunted by his inability (credit Huet) to score all alone in front of the net. Gotta feel for the guy; he attempted to score three different ways, coming up short in all. It's a game of inches. Kudos for the effort.

No goal-scoring heroics from the likes of Richard Zednik or silky passes from Cory Stillman in this one. Chicago was a step ahead of 'em all. And ultimately this bodes well for the Panthers: yet again, the Cats have 60 minutes of video to absorb and - hopefully - learn a thing or two from. Pete DeBoer is not a manager who makes the same mistake twice. Blessed are the Cat fans who worship patience.

In the end, we gave up a game-in-hand to a few of our rivals, but surrendered no points. We'll cover the results from the Eastern Conference a bit later this morning.

Did anyone else get the impression that Michael Frolik was being held back?

Coach DeBoer was quite humble yet upbeat in his postgame comments, essentially conceding defeat and listing the reasons for it. The guy loses, the guy changes his approach. Rather refreshing. You tend to believe in his rosy outlook, if only because he's so honest in defeat.

As for Reverse Jersey Night, Florida looked like, well, Florida, just on the wrong ice surface. The Hawks closely resembled Carolina's new thirds, which are badass, minus the lower striping, which is not in any way badass. The Chicago Blackhawks should be in white or red. Period. Attend to the photo below and dare to disagree: 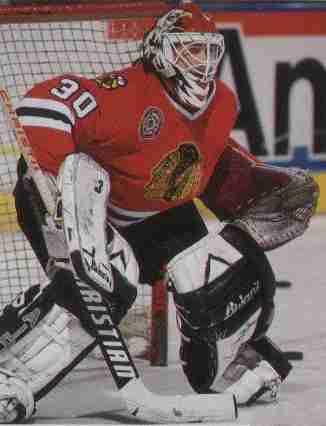 On a personal note, I had a great time at Second City Hockey during their Open Thread (and admission was free!). A wonderful site featuring passionate, welcoming fans. And don't forget to ask about the TorchettiBot. Already looking forward to Helsinki. Thanks guys...you've got brothas in Sunrise!

Do yourself a favor by visiting their site and catching the game recap from the "enemy's" point of view. They are just as blown away by the performance of their team this season as we are with ours. Been a long time coming all around. Eerie hearing their humility...sounds frighteningly familiar. 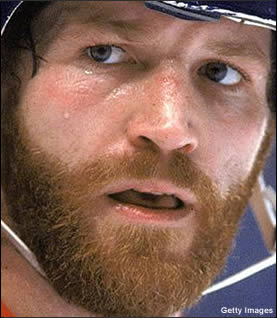 Last point: Forget cowbell...we need more Potvin! I realize there are a lot of folks perfectly willing to throw brickbats at our Denis, but all-in-all, the guy is entertaining, informed, and brings more to the broadcast than, say, a (no offense) Brian Skrudland could. He's been with the club since Day One, and no one wears the Screamin' Kitty better than he. Full props, Fox Sports Florida, for giving the guy a chance. Here's to seeing a lot more of him. 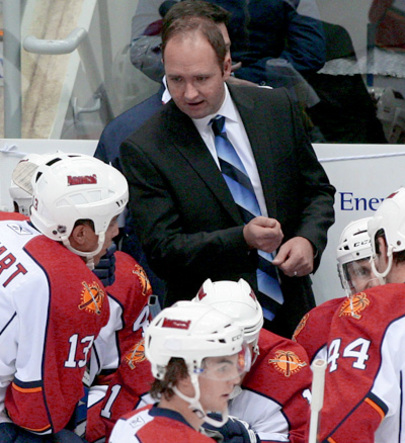 Florida coach Peter DeBoer: "What kind of a world do we live in where a guy named 'Eager' steals all of my press? This town needs an enema..."

NEXT UP: Eastern Conference Combat for Friday