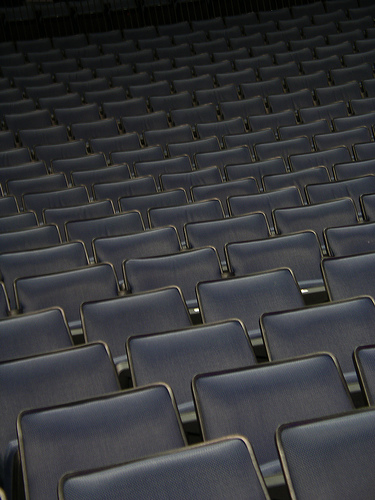 Is this scene finally behind the Cats?

Received an email from Rob, a college student who runs/edits Puck Money, a phenomenally well-researched blog covering various business aspects of hockey, giving me a thoughtful heads-up ton article he posted yesterday concerning the Panthers, specifically their attendance: why it is at it's current level and how to improve it. This is part of a series Rob has been composing, taking a look at all of the "lower-rung" clubs (my quotes), attendance-wise. It's a good read, and he's got a pretty solid handle on not only Florida's situation, but those of the other clubs he's covered. The link to his Panther story resides here.

If I had to critique the post at all, I would only add the positive influence that Palm Beach County (just to the north of Broward County/Fort Lauderdale) has on attendance. Many - including myself - are from this (rather affluent) area of South Florida, and a healthy number of season ticket holders reside there. For the record, I am not one of the affluent, and please stop calling me Shirley.

The BankAtlantic Center is indeed a beautiful, fan-friendly building located on the cusp of the Everglades. It's unlike any other arena location in the league. Wide common areas and bright colors dominate, large windows give a tremendous view of the wildlife preserve to the west, and spacious hallways contribute to the atmosphere. They also put on a heckuva show inside. The production values are superb. It's first class.

Based upon distance and my work schedule, I don't get to nearly as many games as I would prefer, but it is always a pleasure heading to the BAC. Yes, it's a bit outside of town. But the roadways are all well maintained and designed - for the most part - to handle the volume on bigger nights. As Rob mentioned, the parking is well laid out. The food is above average and the vending prices are par for the course.

Very few folks have had to pay face value for tickets this year - as has been well-documented - but the simple strategy of getting fannies in the seats has slowly worked, and a demand for tickets is growing. But make no mistake: this is a DIRECT result of the on-ice product; the cheap admission has certainly helped, though I believe attendance would still be up dramatically based simply on the team's play and record. Bang out a playoff round and that demand will remain next year, minus the deeply-discounted seats.

Personally, I see "our" arena as a unique jewel among the typical cookie-cutter industrial-style buildings with very little character located in the heart of a metro-area. Like Brad Wesley said of his niece's choice of workout music: "That sh*t's got no heart."

Anyway, be sure to set up a link to his site for what promises to be good stuff in the future.