Jay Bouwmeester, Jacques Martin and the Kingdom of the Glass Trade Floor

Share All sharing options for: Jay Bouwmeester, Jacques Martin and the Kingdom of the Glass Trade Floor 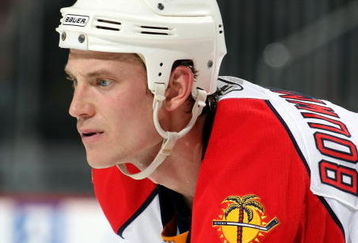 "Good things are happening in Florida, and it's easy to see why Martin is tempted not to mess with it, even if the gain is short term."

BUT...hanging on to the undisputed number-one target of Trade Deadline Explosion 2009 will ulitimately damage the franchise far more than keeping him for the stretch run.

This is essentially what Custance states in his Sporting News article from Wednesday.

I'll be the first to admit it: this has not been an easy time for anyone - MSM or bloggers alike - covering the Panthers. The wins have been sensational, the heroics among the roster inspiring, and a faithful lack of hair-trigger moves to cover injuries have displayed the resolve of GM Jacques Martin - formerly a shunned coach with a forced employment ultimatum - and his willingness to stay the course...his course, believing in a system frought with the potential for disaster.

However, the eight hundred pound ewok named Bouwmeester "looms like a shadow over everything" the organization has built, to use not one but two Star Wars references as a description.

I've written previously that a team's performance is far easier to comment on when it's losing. No longer the case in Sunrise, all should be happiness, rainbows, and free Italian subs from Publix. With chips.

I agreed with Craig's argument as recently as three weeks ago: the prospect of Scoring Big at the deadline, burning the present of another NHL club while dumping a  "short-sighted" but understandably-weary and playoff-scorned young defenseman with every bit of talent and ability to be a franchise cornerstone.

Who can argue with the logic? Let's go stereotype: a guy who doesn't want to be here - has "made it clear" - must be dealt away for a bounty of above-average roster player ____, 2009 draft pick #____, and uber-prospect ____. The key to the Panthers' future has been uncovered. The parade route begins in North Palm Beach.

Meanwhile, back in Sunrise (a city on Earth): a particular hockey team in a bandwagon market, which hasn't sniffed playoff ice since well before the USS Cole became as common a successful marine reference as the Hunley, weighs its' options.

Hmmm...keep the stud D-man and your team's essence intact for what may be a dream playoff run (and by "dream" I mean one round...we're easy to please down here) and the fallout which consists of increased season ticket revenue for 2009-10 (which has already picked up) and priceless local media coverage. Or, the Cats could get blown away with a proposal on Tuesday - and by "blown away" I mean something north of Bertuzzi and...oh forget it - and have no choice but to sign on the dotted line.

Unless names that begin with "Ovech", "Malk", or "Datsy" are in the mix, Florida would be wise to shun such a deal. Of course, there are variations that should be considered, and if such a trade were to go down with "lesser" players, as fans we'll all be Martin's judges...perhaps executioners. One can't argue with a blockbuster that benefits "your" club on every level.

But those are rare. Typically, there's a winner and a loser, and in my experience (a wrong-side veteran of the Francis/Samuelsson for Cullen/Zalapski war; the Luongo for Berto battle) it's always a thorny path to walk. Changing the mix of players and personalities the maybe-playoff Panthers currently comprise - especially the removal of one who has meant more to the club this season than, honestly, anyone - is a dangerous precedent to set. Take him out, and without proper restitution, the remaining players are holding their jocks wondering whether management has both oars in the water. And worse, what is their part in the new sandbox?

Jacques, it's obvious, and we've all heard it so many times over the past eight weeks: if you must deal, please Get Market Value. We're a bit gun-shy as Panther fans regarding Big Trades. I admire both sides having kept negotiations relatively quiet (outside of Jay's Dad helping things along). As a biased Florida dood, I really hope a long-term deal is worked out with Bouwmeester in the next few hours and days.

Jay: this is an up-and-coming organization. You know it. Your agent knows it. And you've seen the fans - diehard and bandwagon alike - come out in recent weeks. Weigh your decision carefully...and talk to Bryan McCabe about playing in hockey meccas.

If not able to engineer that monster deal, hang on to him for the run, JM. Plant the seed that spawns a giving tree by simply getting to the playoffs. It's that important.

The organization has a solid if not perfect minor league foundation of talent, and a bona fide goalie of the future just a year away. South Florida hasn't been this excited about your Cats in nearly a dozen years. No pressure, but pro hockey's long-term future in this market hangs on you and your staff's moves over the next few days.