Share All sharing options for: Litter Box Liners for Friday 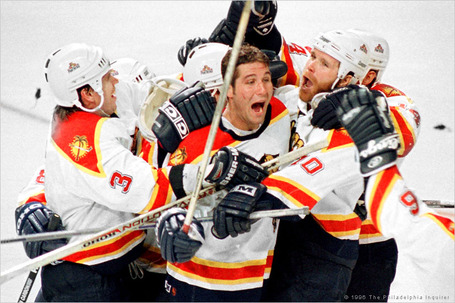 I may be getting a bit ahead of the job at hand, and the guys pictured above aren't Booth, Bouw, and Zeds, but felt it was appropriate to keep current events in the proper perspective: Dave Lowry (r, #10) and JovoCop (c) celebrate the Eastern Conference semifinal-winning goal in May of 1996. Defeating (Lindros') Flyers, (Bourque's) Broons, and (Lemieux's) Penguins, the Cats roared into the Stanley Cup Final. Look elsewhere for the end result.

And here we are, thirteen years later. Is it me or do the modern Cats look a lot like those older Cats? Coaching? Player development.? Wise roster moves? Frye?

And is Anderson back or what? Yes...I groaned through the first period expecting the worst, but he simply got better as the game wore on; the D tightened up, and everyone became responsible. Should've known what the old boy was capable of, seeing as we had him pencilled in for the Vezina only six weeks ago. My bad, Andy. 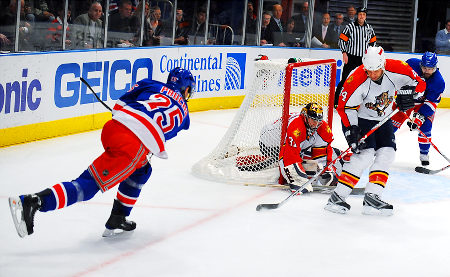 Petr Prucha gets a stickfull of Nuthin. All Andy.

Useless Factoid of the Day: I just met Larry Bird's brother and sister-in-law. Nice folks. Never know who's gonna walk in the door...