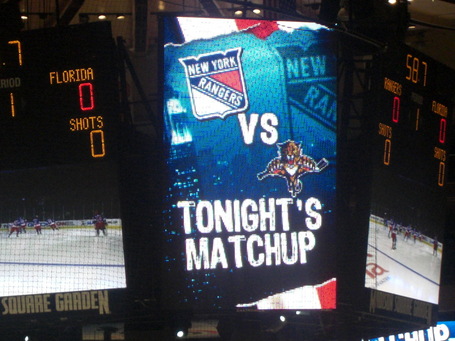 It was ugly, angering, confusing, and then beautiful.  Overall…it was great!  You can’t complain when you are leaving Madison Square Garden with a big fat grin on your face amongst some very pissed off Rangers fans.  Just like after the 6-1 win at Pittsburgh, all I can do is smile when people are yelling ‘Panthers Suck’ at me after the Cats just won.

Tonight started with a nice 10-block walk from my hotel in Times Square to the Garden.  I’ve been to NYC many many times over the past decade but this is the first time I’ve stayed in Times Square.  It’s usually the area around 30th and Park where we like to stay…but hey, I’m not complaining!! 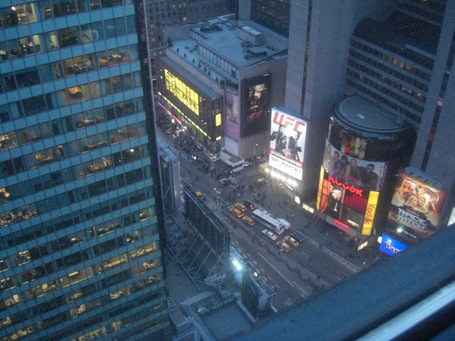 The view from our hotel room

The first thing I did when getting to our seats was look around for other Panther fans.  I wasn’t expecting to see many, but boy was I wrong!  I looked left and there was a Vokoun jersey sandwiched in between a couple of our ‘vintage’ sweaters.  About 4-5 rows behind me was a Booth jersey, and sitting right next to me was none other then Panthers minority owner Michael Maroone.  There’s random…and then there’s tonight.  He was amazingly nice, sitting with his family while enjoying the ambiance of the Garden.  I did ask him for his opinion on the Bouwmeester situation, but of course he couldn’t say much, just that as far as the franchise is concerned, not-making the playoffs is "unacceptable". 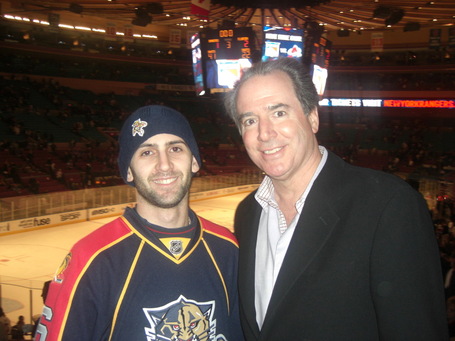 The game…well, we all know how that went.  It was terrible at the beginning and wouldn’t get better for a while. Still, despite being grossly outplayed and outshot, we kept our faith, knowing that our Cats have a knack for the comeback.  Then all of a sudden, Booth comes flying down the wing and puts a backhander right between Henrik’s wickets and we all exploded.  My joke to the Whale-man was that there were lots of Panther fans yelling "BOO-th" after the goal…but I think we all know what they were really yelling. :o)

How sick was the play Zednik made to set up Horton’s goal?  I’m not sure which Ranger it was…but whoever was covering Zed on the play got owned.  He was tossed aside by Zednik’s free arm (the other was busy controlling the puck) and the rest is history.

It’s amazing what can shift the momentum of a game.  The Panthers killed some big penalties to open the 3rd, including a 49 second 5-on-3 after what I thought was a very weak penalty call on Skrastins.  Then later in the 3rd (I think it was) Jay Bouwmeester hit referee Bill McCreary right in the back with a slapshot intended as a dump in.  For some reason, that seemed to be when the Cats started to tilt the ice their way.   Whatever it takes, right? 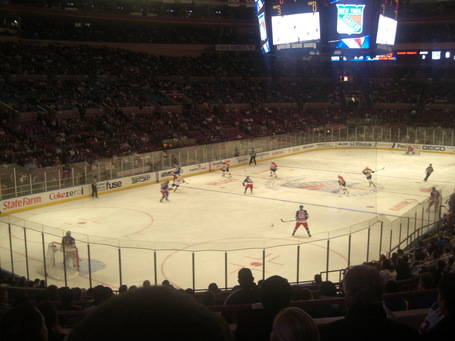 Tomorrow is an ‘off-day’ for Panther games, so I’ll be hanging around the city during the day and checking out the Knicks-Sixers game at night.  Talk to you later…enjoy the victory and 6th place! 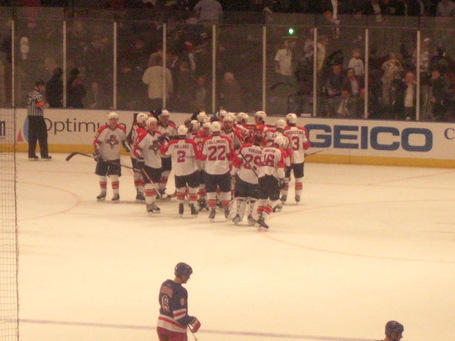