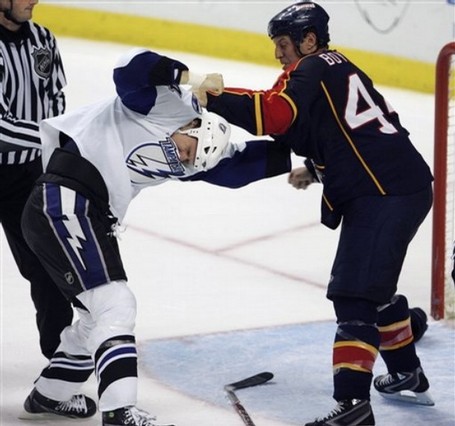 Still trying to put the pieces together on this, but defenseman Nick Boynton has apparently been sent bak to Florida for the remainder of the Panthers' current road trip, apparently for "disciplinary reasons". Noah Welch will take the now-empty spot on "D" beginning tomorrow against the Devils.

No telling what reason(s) are being referred to as yet. Boynton did not play in the third period of last night's 2-1 victory at Madison Square Garden, and may have seen his last action as a Florida Panther, as reported by George Richards and Steve Gorten of the Miami Herald and Sun-Sentinel, respectively.

Whatever the case, GM Jacques Martin may now be urgently shopping Boynton, who is in the final year of his contract.

"There's no panic here and no animosity. There was something that occurred, sometimes they occur in pro sports...It'll get resolved, there's nothing life or death that is happening here."

MUCH more as this bizarre story unfolds.