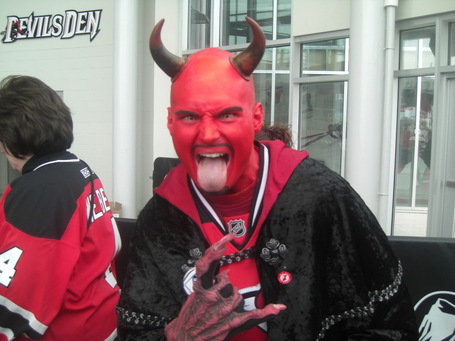 No...this is not the Devils mascot. Really.

As much as I would like to ignore the first half of my day…unfortunately you have to take the bad along with the good.  And as you all know, this one was pretty bad.  Luckily the Devils fans seemed to show some pity and not heckle the crap out of me.  While I don’t expect a whole lot our of our boys tomorrow in DC, I think we’ll see get an idea of what these guys are made of because they haven’t faced this kind of adversity yet this season.  And we cant really look past the Caps game to Atlanta and think of it as an ‘easy’ win…didn’t the Thrashers just beat Carolina by scoring 4 goals in the 3rd?

I will say this about our team…I think the whole Boynton issue was handled very poorly.  I can understand PdB and JM wanting to send a message to a player, and benching said player is usually the way to get their attention.  And with Boynton, obviously they did because he was very upset after the Rangers game.  But how can you not expect him to question the decision?  These are grown men and playing hockey is their life; why would you be surprised by one of your more emotional players questioning being benched?  Considering how we have been struggling defensively of late, giving up way too many odd-man rushes and not picking up the late guys coming into our defensive zone, I don’t see the logic of ‘sending a message’ when the most important thing to the team is winning.  We are in the midst of what they call a HUGE road trip, and then they go and shorthand themselves. 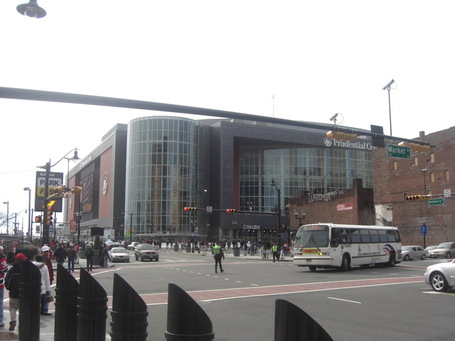 The Devils arena is nice, but HUGE.  The food selection is pretty good (at least on the 1st level, I cant say for upstairs but I’m sure its similar).  One thing I noticed was that when the Devils scored, you don’t really year the crowd yelling ‘yeaaaa’.  At Panther games you can clearly hear the crowd yelling after every goal, but I didn’t notice it in Jersey.  Possibly because of how spacious the arena is…because there was definitely a second or two delay between the goal being scored and the horn blaring throughout the rink. 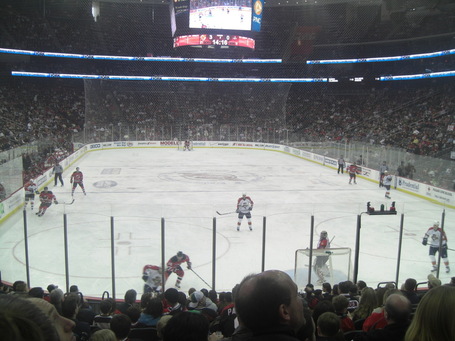 The puck in our end was a constant thing all game

After meeting up with some friends for a post-game meal and a little chillage, it was time for some laughter.  It just so happened that we were in NYC smack-dab in the middle of Will Ferrell’s 1-man show about George W. Bush, which is only running for 8 weeks.  HBO will be broadcasting the final night of production live on March 15th at 9pm in case you would like to check it out. 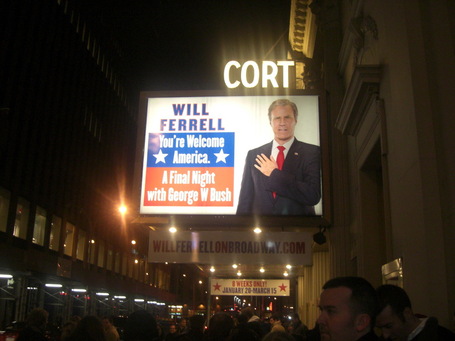 After the show I hung around outside the theatre hoping to catch Ferrell leaving.  45 cold minutes later, out he popped.  Not only was he nice enough to sign autographs for the people who had waited for him (myself included), he took a picture with me but not without adding his own comical touch. 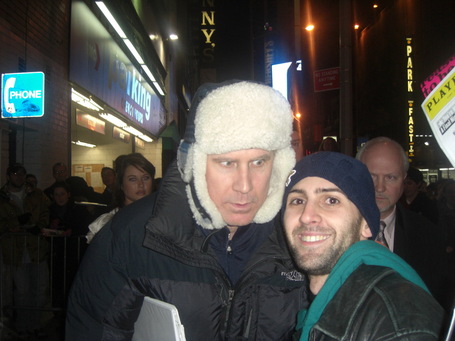 Even Will Ferrell can't take his eyes off of me...

OK my fellow Panther brethren, I’m going to head to bed.  Waking up in 6 hours and jumping on a train to DC.  Its supposed to snow pretty heavily around here fairly soon…but from the look of things outside my window it hasn’t begun yet.  The white stuff is also in the forecast for Washington…I miss sunny South Florida.  Wasn’t it in the 70’s down there today?