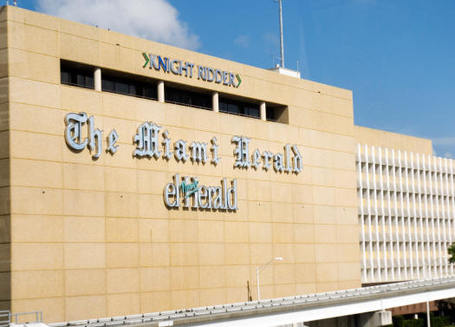 The Herald unceremoniously winds up on a list of ten major national newspapers which are/will be consolidating their departments in an effort drastically cut costs, go web-only, or fold altogether.

"Same goes for George Richards; I know the Panthers aren’t exactly the biggest hub of hockey but Richards treats it as such and always provides insider info. These (beat reporters) aren’t just following the team around to get quotes from game recap story anymore; they’re our direct line to the players and the team’s management."

This is a scary development, though hardly surprising in light of current economic conditions.

In southern Florida, hockey fans have been spoiled with the coverage Richards has provided; not a day goes by without some form of informative shout to Panthers fans.

Indeed: where would the blogosphere be without these folks to "borrow" from, be it quotes, breaking stories, or simply keeping up with your club? They've got access the rest of us wish we had. And for that reason they are invaluable.

If the Herald dumps the local hockey beat, this market is left with the South Florida Sun-Sentinel: a single point of information for mainstream fans. Albeit a very good one (Steve Gorten is as entertaining a writer as is out there), but everyone loses when the choices are limited.

The Palm Beach Post already opted out of the daily Panthers beat back in late September, citing, well, nothing, since the paper decided not to address it. Emails I sent to former beat writer Brian Biggane, the Post's sports editor, Panthers president and COO Michael Yormark, and vice president of broadcasting Randy ("I draw dingdongs on people") Moller asking for comment produced zippo. Not one of them responded. Granted, this was back in my salad days at Blogspot, but still.

One of your product's three local news outlets cancels it's coverage. Must not be important. Hockey-mad Broward puck fans will look elsewhere.

(In the Post's defense, Biggane appears to be back on the beat, at least semi-regularly. None of this was his fault, in any case...he's as solid as Richards and Gorten.)

In any event, losing continuing coverage by Richards and el Herald is yet more ammunition for the folks who live to bombard South Florida as a lousy market. Let's hope the situation can be solved in all of our favor.

Big thanks to Mike Chen's Hockey Blog via Kukla's Korner.