posted by Whale4ever about 1 hour ago

posted by Whale4ever 1 day ago

We can roll the score below around until 7:35 all we want, but somehow the impression remains the same: Gonna be a battle for the Cats tonight:

Even as the Washington Capitals are playing wildly inconsistent hockey -- winless in four, winning three and then dropping a bad one in Atlanta last night -- Ovechkin's offensive output has been steady if not overpowering; for example, he hasn't had a multi-goal game since Feb. 15.

Mr. Wyshynski was also kind enough to point out that going into tonight's lovefest in Sunrise Ovie has 49 goals. Commence tears and Celtic chants of sadness and doubt. 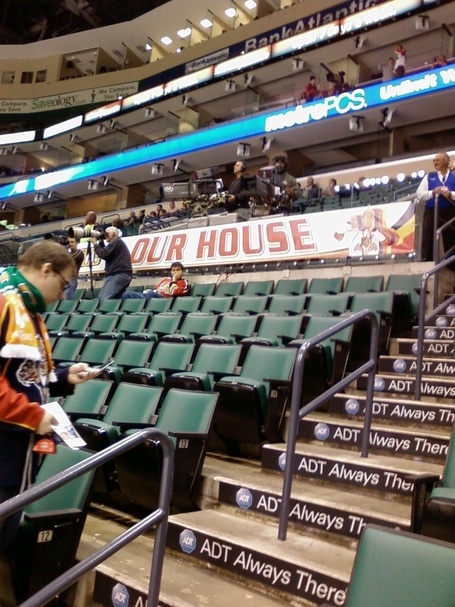 Before Saturday's game. The "VanMurph Banner", courtesy of Old Dave.

Give a shout to our buds at Japers' Rink (punctuation courtesy of Japer himself).

Going way out into left field on this one: Assuming he starts, does Tomas Vokoun finish the game? (Poll closes at 9:30pm)