Greetings from a snow covered Washington DC.  As the white stuff continues to bury the road outside, I’m loving the fact that I get to sleep in tomorrow!  Believe me, it’s much needed.  Today began with a train-ride from NYC to DC (love the abbreviations), which took about 3 hours…but went by surprisingly fast.  Other then lunch and checking in to the hotel, nothing much happened before game time. 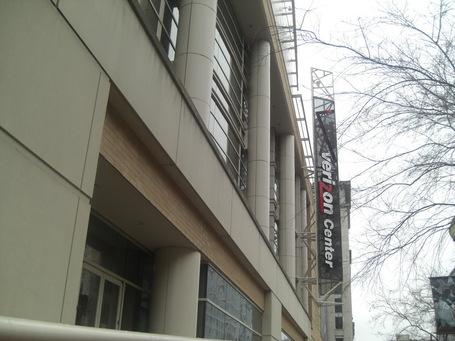 The first thing I noticed about the Verizon Center…it looks nothing like an arena.  It fits in with the rest of the buildings in China Town, and the sign that says ‘Verizon Center’ was in English on one side and Chinese on the other.  Very odd stuff. 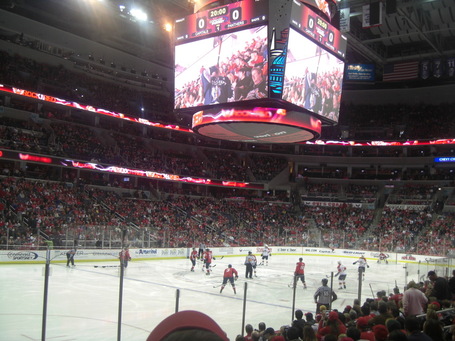 The inside is pretty nice, and it was PACKED.  The Caps fans were loud throughout intros and we’re really into the game…for about 15 minutes.  After they got out to an early lead, I just sat there with a smirk on my face…because what else could I really do at that point?  We just got slammed by NJ the day before, and here we are getting off to the same kind of start. 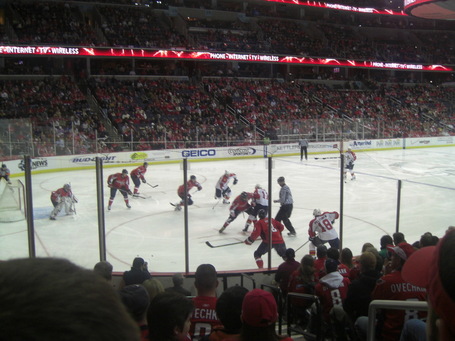 The pessimism wouldn’t last long…2 ½ minutes later the game was tied, and 3 minutes later the momentum would make a major swing.  You could see it in the way the Cats were skating.  There was absolutely no way they were losing this game.  After giving up a few hundred odd-man rushes in the previous 3 games of the road trip, I honestly can’t remember the Caps getting any. 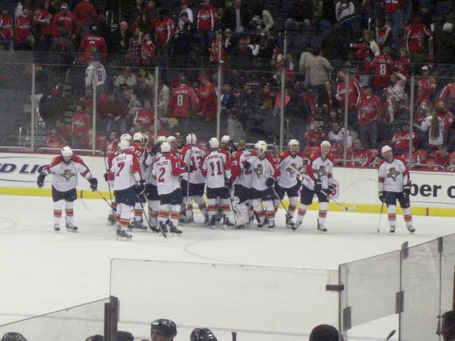 Maybe I got a little greedy when I was hoping for the Panthers to match the 7 goals they gave up yesterday to the Devils, but beating the Capitals by 4 in their own building was still pretty sweet.  The Caps fans sitting around me were very nice, and I had to laugh at the 10-year old kid yelling "Florida sucks, Panthers go home" during the 1st period.  But as quickly as he got started…he zipped up rather quickly when the goals started pouring in. 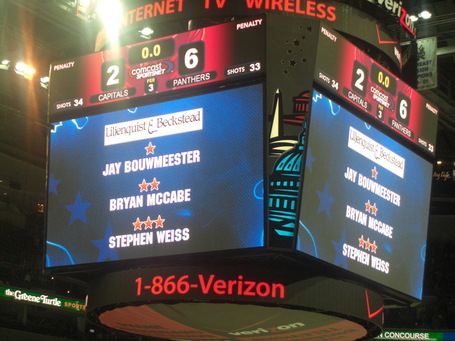 Domination of the 3 stars

After the game we we’re welcomed to the outdoors by some very wet and very cold snow-ish rain-ish precipitation.  It could’ve been raining mini Rosie O’Donnell’s for all I cared, I was on cloud nine after the most unexpected victory.  To be honest with you, of the 4 games on my trip, I thought this was the going to be the very hardest to win. 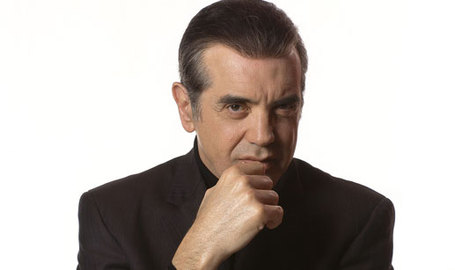 Tonight was another ‘show-night’, but this one was not of the comedy genre.  It was a one-man show of A Bronx Tale starring the original writer of the play/movie Chazz Palminteri.  The name may not ring a bell, but the picture I’m sure helps out.

I had never seen a one-man show before…but I am an admitted lover of Broadway shows.  This was great.  Chazz did an AMAZING job, going 90 minutes straight playing every part, and doing a hell of a job.

Well…I am dead tired.  Tomorrow is a ‘day-off’…was planning on doing some DC touring, but the forecasted continued snowfall and high of 28 may keep me a little closer to the hotel.  Tomorrow night I’m going to the Wizards-Hawks game, but the way this trip has been going, who knows what I may see or who I might meet.
Until then…you stay classy South Florida.

I didn't forget about your submitted questions to George Richards.  The team was supposte to fly out of DC today (Monday) but had to leave Sunday night due to thier flight being cancelled on Mon.  They never made it to Atlanta, staying overnight in South Carolina.  The team should be in Atlanta in the next few hours. I'm e-mailing your questions to George, but considering thier hectic travel schedule, id give him a day or two.