Panthers Get Back On Track Against Leafs

Share All sharing options for: Panthers Get Back On Track Against Leafs 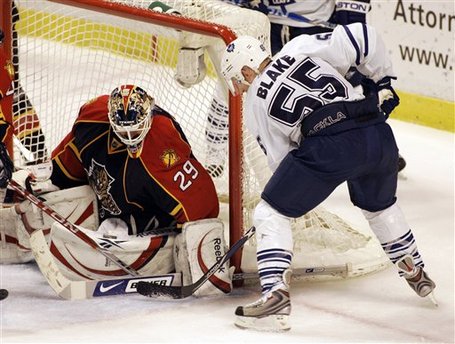 Tomas Vokoun continued to be solid in net for the Cats, and finally got the goal support to back him up.  Voky had 37 saves, including 15 in the 3rd period; his glove was as active as I’ve ever seen, and it was pretty obvious the Leafs scouting report was to go at Vokoun's glove.

As expected, the Panthers came out skating hard...maybe a little too hard as the Leafs we're getting lots of shots in transition.  The Leafs started out by out-shooting the Cats 9-3, but then Stephen Weiss scored his amazing shorty and the momentum shifted.  Toronto got a late PP goal, which probably is what led to the Panthers coming out so tenaciously in the 2nd.

Overall, it was the kind of effort you should've been expecting from the Panthers considering the circumstances.  Had they dropped this one, suddenly the playoffs are pretty far away.  Now they are right back in the thick of things, and have two HUGE home games on Saturday and Monday.

More Box coverage coming from W4E in the morning....g'nite all!