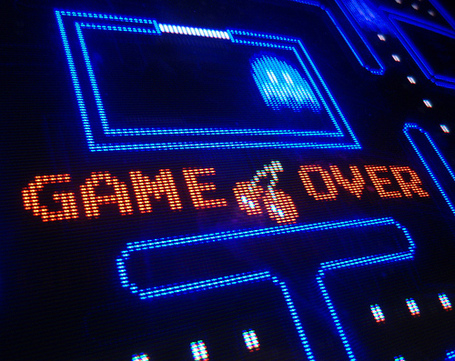 In a span of 2:46 of the third period in Sunrise on Saturday, the Florida Panthers' playoff run came to an end.

For the vast majority of a close game, Rusty Olesz's goal held up, with Tomas Vokoun looking increasingly confident.

The efforts of Edmonton's Columbus' Raffi Torres - good for him, but it could have been anyone, from any team - effectively ended the season for the Cats.

Negative Nancy, you say? Take a peek at the clubs who were chasing the Panthers just ten games ago, and what they've done since:

These are the records of winners; organizations based on a solid foundation of success from within, each member of the club giving everything to achieve a common goal. They don't allow breakdowns with less than three minutes in a game of free, up-for-grabs points.

Meanwhile, Indiana Pete and his Panthers of Glass has been headlining at your local theater, meandering along with a 4-4-2 record over the same span (10 points), fearful of what effect any measure of success might have upon them.

Hey look: Montreal lost on Saturday! Doesn't matter, though, when they peek at the standings this morning. Koivu, Kovy, Price, and the entire 100th Anniversary Commission will take one look at who's chasing them and the realization will set in: move along - nothing to see here. The Panthers? A threat? With their recent record? Forget it...and into eighth place they'll stumble, without fear of losing that spot over the next three weeks.

Does anyone seriously believe Carolina (85 points) is going to give up the goat and struggle mightily down the stretch? Or Pittsburgh (86 points)? How about the Rangers (7-3 in their last 10)? Florida's 80 points look pretty insubstantial, no matter the blood and effort went into obtaining them. What have you done for me lately?

The Habs may very well have lost their minds and plotted a course to obscurity for the remainder of the year, but they're not gonna lose every game; that being the case they've still got an advantage over Florida in that the Canadiens currently reside in a playoff spot.

I'd love more than anyone to be proven wrong, but let's face it, people: It's Over. Been a fun year for all the ups, downs, adversity, injuries, controversies, and heroics that lifted all of us when we - and the organization - needed. More importantly, a positive glow had emerged over the roster. Stephen Weiss, Nathan Horton, Greg Campbell, and so many others. A look that stated a potential for success. Most refreshing. Pete DeBoer has performed a Sunrise Miracle, and who can throw Jacques Martin to the dogs now?

But it's finished. Forget games-in-hand. Bury the notion of a stellar race up the standings (which would be kicked off tomorrow against...the Hurricanes, right?).

Get in line for next year's seats and carry the torch high above your head, Panther fans. No shame in what's taken place.

The lousiest part? For a few short months we had respect, which wanes as easily as it is difficult in achieving.

Bottom line: the Cats threw it away last night. Pack it in.