Share All sharing options for: Florida's Nathan Horton: Ready to carry the load? 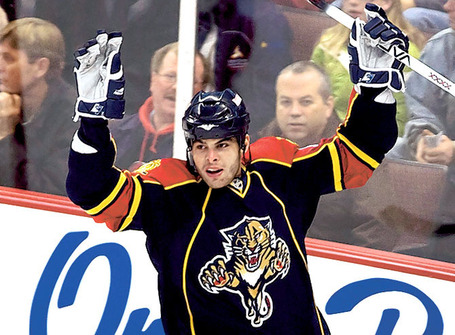 With a game behind him since returning from injury, and his club in desperate need of scoring, has a new, re-wired Nathan Horton emerged as a leader? (Some would add the word "yet" at the end of the sentence.)

An aside: speaking of injuries, have the Panthers somehow achieved a twisted record for skate-induced fratricide over the past year? Bizarre.

Back to Horton: has this organization ever needed him - their first choice, 3rd overall in the 2003 entry draft - more than they do at this very moment? Which player ultimately will be looked upon to deliver a playoff spot more than any other (yes, I know, but he tends goal, and David Booth wasn't drafted as a "savior")?

Among the current Panthers, fairly or not, Horts alone, at 23 in his sixth pro season, carries the burden of an ultra high pick who's star has yet to shine - and he'll be looked upon to become That Guy over the final nine games of the season.

For the record, and unsurprisingly, Anthony Stewart, Kamil Kreps, Stefan Meyer, Martin Tuma, and badass Tanner Glass were taken by Florida in later rounds of the 2003 draft. All remain in the system. 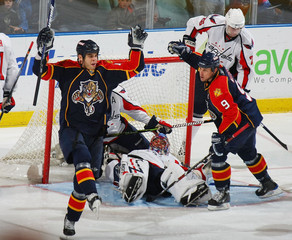 No time to celebrate with nine games left and a playoff spot up for grabs.

Looking over his junior stats, it's quite clear why Horton was taken so high: in 118 games with Oshawa, Nathan banged home 64 goals, 71 assists, and 135 points... all miraculously accomplished while spending 195 minutes in the penalty box. Sick power-forward numbers, backed up with a 6-2, 229-lb frame. This is the dood you plant in front of the net every other shift. Solid stuff for a young center.

HOW COULD HE MISS?

Headed to a (bad) Florida club featuring the likes of Mesozoic-era D-men Todd Gill and Lyle Odelein, he joined a steadily growing stable of highly-touted younglings: Mike Van Ryn, Jay Bouwmeester, Kristian Huselius, Stephen Weiss, and several others who petered out long ago (Vaclav Nedorost, anyone?). It was, more or less, the core of today's emerging Panthers, with Luongo between the pipes and Olli as the team's single offensive star. Oh, and Mike Keenan was his first NHL coach (temporarily, as Iron Mike resigned not long into the season). Horts was seen as the forward of the future for the Cats, and over time began to flourish alongside Jokinen in his new role as a first-line winger.

The lockout of 2004-05 saw Nathan play a forgetful campaign of 21 games for the AHL's San Antonio Rampage, posting 9 points (5 goals).

Upon the reopening of the NHL a year later, Hort's numbers blossomed virtually each successive season, netting 28, 31, and 27 goals through 2007-08 while playing all 82 matches the past two years. Barring a rather successful tryout on a line with Stephen Weiss and out-of-nowhere David Booth, the vast majority of his time was spent alongside Olli Jokinen. On and off the ice.

Jokinen and Horton were believed to be extremely good friends, and the results of the friendship have been hotly debated among Panther fans: did Olli's somewhat nebulous leadership skills affect Nathan in a less-than-positive manner? This came to a head late last season when the duo, word has it, left a charity golf match earlier than what was previously agreed upon. From a PR standpoint, it was a local disaster, and quite probably the final nail in GM/then-head coach Jacques Martin's mind as to the future of Jokinen with the organization.

Just as hotly debated was the deal Martin orchestrated just prior to the entry draft, sending Olli to Phoenix for defensemen Keith Ballard and Nick Boynton. Horton didn't have much to say - or simply wasn't asked - but the effect of losing his friend and mentor for so many years must certainly have been palpable. There were those - myself included - who felt Nathan was the next to be dealt, completely absolving the Olli Generation from Florida's dressing room.

There was now no question who was running the show in Sunrise...and he wasn't named Jokinen. 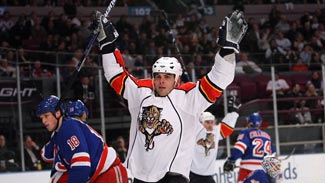 The 2008-09 season began with all the usual new-year optimism, gained as much from the arrival of new head coach Peter DeBoer and the dismissal of Jokinen as any other facet. Anyone who followed the team knew outright that scoring was going to be a major issue with this year's Panthers, and Nathan would be the one shouldering the largest load.

Throughout training camp the question cropped up: who would be captain? Weiss's name is always in the running, so was newly-acquired Bryan McCabe and two-time Stanley Cup winner Cory Stillman. One could make the argument for Horts, considering his time with the club and the psychological effect of ripping the team's best player (sans Bouwmeester) away and promoting his best friend; the organization showing the ultimate in faith.

In any case it didn't happen, and the Cats still lack a captain. No matter, down the stretch it did not appear to harm the club, on or off ice.

Over this seaon, Nathan has amassed solid numbers...for a second-line center. 39 points just isn't going to put fear into a playoff opponent. His several freak injuries, combined with the onerous task of re-learning a position he hadn't played since juniors, has obviously had an impact on the numbers. The wicked snap-shot is still in the arsenal, but all too often it's holstered. The key has been to get him mad, play with an edge, but some games go by and fans rarely remember his presence.

WITH NINE TO GO, WHICH HORTON SHOWS UP?

And therein lies the Big Question, though not by any stretch a new one. Looking down the roster, Nathan should be the go-to-guy in all offensive categories, but he really hasn't earned it. He's arguably a more natural goal scorer than Stillman, Booth, or Zednik. The only competition from a pure talent standpoint may be Michael Frolik, but he's not "there" yet...wherever that may be. Why can't Horton just be who he's supposed to be: the superstar for this team?

He's got nine more contests to prove he belongs on that first line, preventing a major move by Martin to overpay for an on-the-downside center in free agency this summer. He's homegrown talent who's been through a maelstrom of personnel and management changes in his relatively short career, but don't misunderstand: Horton is a grizzled veteran (at 23!) for whom stability can only assist.

Does he have it in him to throw the Florida Panthers on his back and march them to the playoffs?

Have I mentioned there are only nine games remaining?