Share All sharing options for: Panthers Road Tripping With DpD

Today was the final stop on our Panthers Road Journey, and boy o boy has it been a blast.  Freezing weather and snow are just something that ‘normal’ hockey cities have to endure, so despite being quite cold throughout the trip, it was something that I somewhat embraced.

This morning we had an 11am flight to Atlanta from DC, and luckily Reagan airport had emptied out after being packed due to cancelled flights on Sunday night/Monday morning.  The 90-minute flight was a first for me…the first time in as long as I can remember that I didn’t utilize my iPod.  The reviews didn’t lie, this Watchman book is sick.  I’ve gotten about a quarter of the way through it, but its goooood. 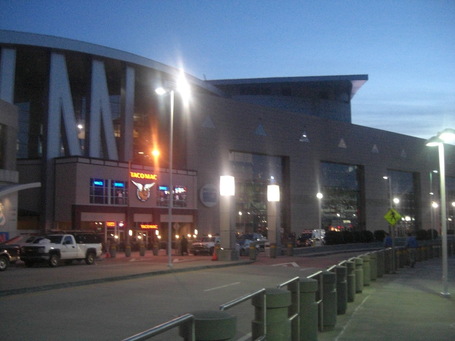 After arriving in Atlanta, I took the MARTA train downtown to the hotel, which is about 2 blocks from the arena.  I’m somewhat familiar with the area since I was lucky enough to attend last years All-Star Weekend here.  This afternoon was pretty chill, got caught up on some Heat/Panthers updates before heading to the rink. 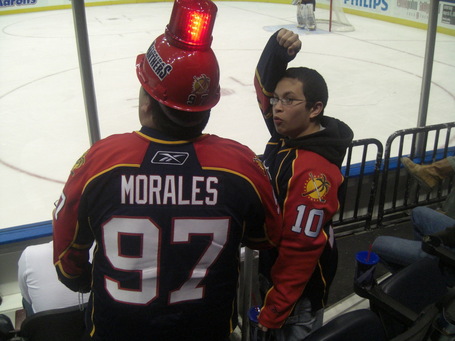 My neighbors from our season tickets in Sunrise, Jose and Mark, made the drive up from Miami just for the game, and as fate would have it, our seats were right next to each other (they were 2 rows in front of us in what seemed to be ‘Panther Corner’).  We may not get the 16,000 fans that some teams draw every home game, but the Panthers have some hardcore dedicated fans. 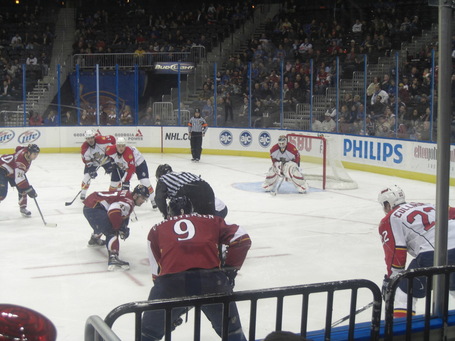 It was nice to see Tomas Vokoun back in goal for the Panthers, but I’ll admit that I was a wee bit skeptical since he had not played in over a week.  Voky had been playing so well that I was worried he may have lost a step.  NAH.  He looked great tonight.  By great, I mean he looked like his normal self, which is perfect as long as our supreme D does its job in front of the net.  They certainly compliment each other, and that was apparent tonight.  The goals that the Cats gave up were on 2nd, 3rd and 4th chances in which our defense could not clear out the front of the net.  No cheapy’s on Vokoun tonight.

Phillips Arena is pretty nice, but it was also pretty empty tonight.  Not nearly as bad as the Wizards game last night…but still.  Even when the Panthers stink, they still draw over 10k.  The ‘announced’ attendance tonight was just a smidge over 10,000…but we know how those numbers don’t actually represent the filled seats, just ticket sales.  Id say it was closer to 8,500-9,000.   The fans sitting around us we’re amazingly nice, and I didn’t hear one negative thing yelled in our direction all night. It was a great game to end the trip on.

Another awesome thing that I noticed was the Thrashers Ice Crew.  A group of figure skating hotties (for the most part) in very skimpy outfits, but actually did a pretty good job.  Very similar to the ones on the Island that we all know from the now famous pic of Andy ogling them.  I would like to begin the movement that we need to upgrade our ice crew at the BAC from the teenage guys to what I saw in Atlanta tonight. 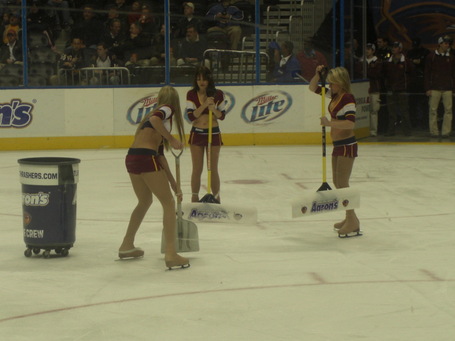 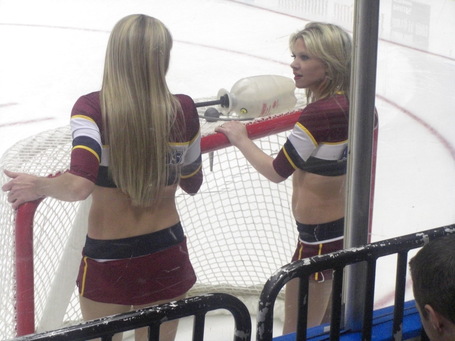 "Oh my god, did you see that guy Frolik?"

It was great finishing the road trip with a big victory against an Atlanta team that had been playing pretty decently of late.  My season ticket neighbors came prepared with rats, almost as if they knew we were going to win.  The Panthers (namely Keith Ballard and Anthony Stewart) were happy to see the rats on the ice, and Stewy fired one back at us, which one of the Ice Crew girls was nice enough to toss back over the glass to me.  The little guy is now watching me type, anxiously waiting his trip home to be tossed on the ice in Sunrise on Thursday. One of the ice girls got real freaked out by the other rat on the ice, thinking it was real. It was quite hilarious. 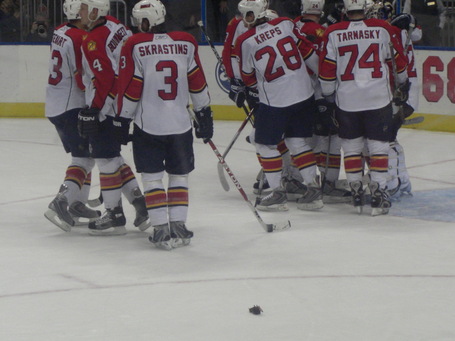 Overall folks, this trip has been pretty awesome.  Not only did I get to see the Cats go 3-1 and win some big games, but I had a blast along the way.  The best part however was being able to share it with you guys.  I really hope you enjoyed reading these journal entries nearly as much as I did writing about it.  Thanks for humoring me, and as always…GO PANTHERS!!!