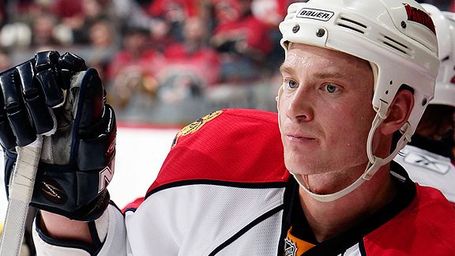 Ninety minutes have gone by since the deadline passed, and it may be safe at this point to declare Jay Bouwmeester will play out the season in Cat unis. There has been no official confirmation from the club or league - and deals are still being revealed - but let's go ahead and call it a done (no) deal.

Philadelphia pushed hard to get under the salary cap in order to obtain Jay, and ultimately pulled out of the bidding. Vancouver was the last rumored participant, with names such as Bieksa, Raymond, and draft picks tossed about.

AGAIN: there has been no official confirmation, but at this late period, The Box is satisfied that Bouwmeester will sleep in his own bed in Sunrise tonight.

Did Jacques Martin make the right call? We won't know for a few weeks. This is quite probably the one "move" that defines JM's managerial career when all is said and done.

Personally I applaud the decision, when only a month ago I cried for assets in return. Flip-flopping aside, the point of contention for me was the realization that this organization needs a playoff run and the advertising and ticket sales, as well as attention, that success brings. The Martin/DeBoer tandem has - more and more - shown consistency and a willingness to Stick To The Plan.

This is not a Don Waddell, gut-Atlanta's-future cash-grab. Congrats, JM. Go Cats.