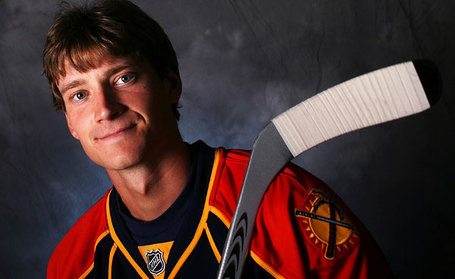 Bo spoke to the media after this morning's skate.  From The South Florida Sun-Sentinel's Steve Gorten:

"I'm happy. We've had a good little run here. Things are looking up. Everyone's looking forward to making the playoffs."

Bouwmeester said he was a little relieved to have this trade talk behind him.

"Yeah. You just don't have to deal with it, I guess. It's good to put everything behind you and focus on playing hockey. It's kind of what I've been doing all along, but it's just one less pain in the butt."

Bouwmeester said he didn't talk to anybody yesterday. Center Stephen Weiss, a good friend of Bouw's, said he thought it would be better to leave him alone, but Weiss said, "I had my eye on the ticker all day."

Said Bouwmeester: "You kind of knew. I had a feeling nothing was going to happen."

I asked Bouw what he was thinking during the day as he waited: "Not a whole lot. If something happened, then you deal with it, but I wasn't sitting there just worrying about it."

As for the final 18 games and making a playoff push, "Everyone's excited. It's a position we haven't been in for a long time. ...It's a lot funner to be in a position like this where there's a real light at the end of the tunnel."

DpD Says: The team as a whole seems very happy right now.  All you hear is positive comments coming from the players, and they are all saying the same thing.  Playoffs.  Just because Bo is a free agent, why is it assumed that he's thinking about his contract situation during the season?  These guys are all focused on getting to the playoffs and positioning themselves to really make a run at something.  Bouwmeester's playoff experience is so minor it should really be overlooked (played a couple games in AHL Finals, called up on a 'loan'), and I think he is as 'into' the hunt as every other long-time Panther.

Should the Panthers indeed make thier playoff run, Bouwmeester would have that thought fresh in his mind when he begins thinking about being a FA.

Now that the trade deadline has passed, lets forget all the b-s and do what our players are doing.  It's time to focus on 1 thing.  Playoffs.