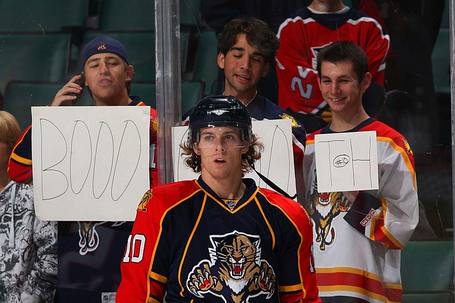 Lots to do tomorrow, so off to hit the hay. But an insane game by Boothie during Tomas Vokoun's 500th game in the NHL. D-Vo was on fire as well. The entire team was buzzing, keeping their composure when St. Louis deserved extra attention. This was not a cake-walk...the Blues needed these potential two points. David Backes poured it on with two goals - a career high.

Only one David could triumph, and it was The Assassin.

Want to say "thank you" to the good folks at St. Louis Game Time, SBNation's Blues blog. I was treated well and fed like any other POW as the Geneva Convention stipulates.

Full Box coverage in the A.M. Thanks for coming out! Go Cats.