Share All sharing options for: A man stands alone... 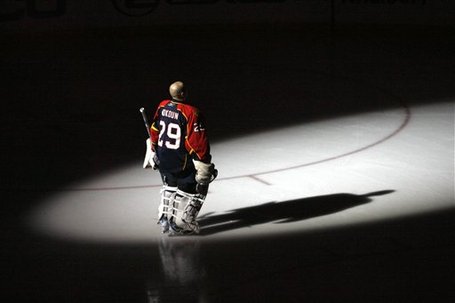 Vokoun is a good guy, and after being around him all season (and being a goalie myself) I have to feel for him.

He's a great goalie, but his unorthodox style and tendency to give up some weak goals have led to his demise. At a time where everything a player does is under the microscope, the goalie faces even more scrutiny. Poor, poor Voky picked the worst time (Buffalo) to have a questionable performance.

Now, the question is if/when Vokoun will find his way back into the starting lineup, and under what circumstances. Should Andy reel off a couple more wins, and assuming that Florida is still right there with Montreal and the Rangers, poor Vokoun may not see another start. The home finale against Washington seems the most likely place for Vokoun to play...that is unless Anderson is still winning and has the team on his back, which is very possible.

Either way...I still feel for Vokoun. He has killed himself for the Cats for 2 seasons, but has fallen the victim of desperation by a team needing wins. Now he sits on the bench, hoping for goals and saves by his teammates, but wishing he could be out there helping. After the Panthers last game against Ottawa, I was in the locker room with the rest of the press talking to Cory Stillman. I looked up and saw Vokoun walking by, and give him the half-smile/nod. He looked back and his eyebrows wrinkled, giving me the 'meh' face. What else can he do? He wants his team to win...