Share All sharing options for: POLL: MSG to introduce "virtual ads" on glass - goodness or badness?

This story has gotten a bit of play over the past few weeks, but it looks as if - short of corporate logos on uniforms - a hockey fan's worst aesthetic nightmare is coming to a televised game near you (actually, tonight in New York):

"Virtual ads are the truest form of immersive advertising," said Dan Ronayne, executive vice president and general manager of MSG Networks. "This puts a brand right in front of a game in a way that is prominent and impactful."

I get called out routinely for my old-school hockey mentality, fondly recalling the days of sponsorless icings, a thankful lack of pre-game pyrotechnics, and sheets of ice and dasherboards whose only prominent artistry was provided by the red and blue lines. Witness: 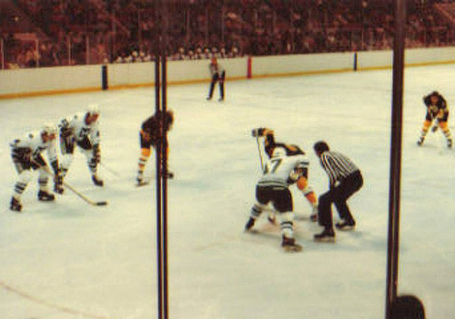 An innocent age. But of course, times change and streams of revenue must be expanded or created. It was only a matter of time before ads migrated their electronic way up the boards.

Thanks to Kukla's Korner for the link.