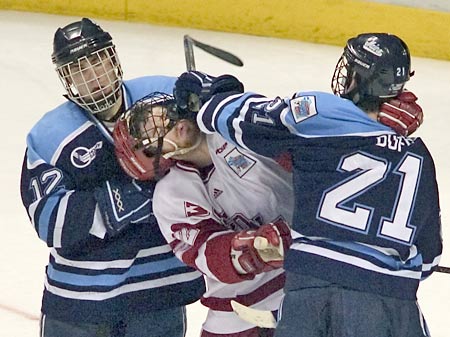 Splitting several games between Rochester and Florida (ECHL), the 23 year-old former fourth-rounder opens up a bit during a quick break in playoff games with the Everblades.

Have the Panthers begun talks with the goal of a new contract over the summer months?

Not really. After the season was done with Maine, they gave me the opportunity to go to Rochester. They didn't really say much to me. I just wanted to go there and show them I could play at this level and do whatever it takes to get there and get a contract.

W4E say: Not exactly a blue-chipper within the fold, the former assistant captain of the Black Bears may well get a bit of interest from the Panthers; he's been in the organization for four years and is just now graduating. The only knock is the depth at "D" which Florida has quickly accumulated since Duffy was drafted. Is there room in Rochester or with the Everblades going forward?