Share All sharing options for: POLL: Which shwag sucks more?

From the beloved Urban Dictionary:

Shwag: A term originally referring to lousy pot, which has also come to describe anything else lame or inherently sucky.

As long as I can remember to get around to it - and it could be a long summer - The Box will be presenting some of the more "interesting" Florida Panthers items available for sale around the web.

Today brings two items of such infinite visual horror that I present to you without comment seven Americans...gentlemen all! these unique products: 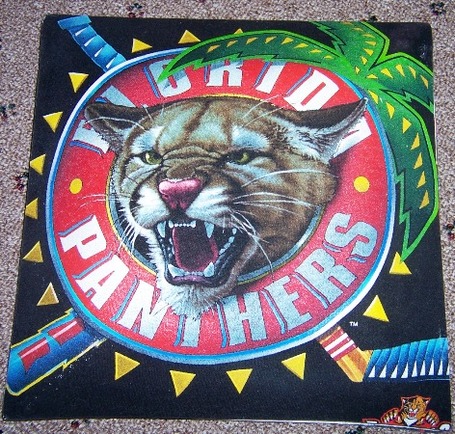 The Panther Lamp - of sorts - which is available now at eBay (get in there quickly; no bids as of yet but there's bound to be a rush at the conclusion of its May 5th close. Yes, May fifth.).

"Isn't this cool? Perfect for the Panthers hockey fan in the family. Unique graphic makes this truly a one-of-a-kind light fixture that will stand out from the rest."

Indeed it is one-of-a-kind. In all honesty, it's a true labor of love. And it will surely stand out from anything you'll find at THE Home Depot. Actually a rather impressive effort. But does it best the competition?

From the "NHL Hockey Store" (has Gary's team of ex-NBA lawyers heard of this one yet?) this here be what me believes is a 2006 draft hat. Not altogether terrible, with the exception of a grossly misplaced secondary logo on the bill. And it's only $22.00 (!!!) to boot. Such a deal.

For the head of a toddler, perhaps.

UPDATE: the interior link to the hat opens a page to the 2007 draft hat (which looks pretty kewl on me). But so what. Vote.