Assuming I've been forgiven for using so cliched a title, we'll move along to a snippet from the WC in Switzerland, since I've grown fatigued at reading two days of Carey Price hatred: 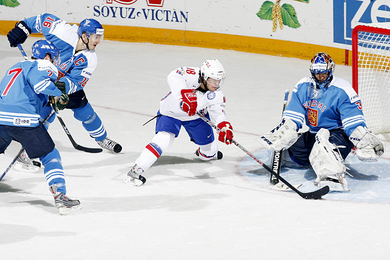 - Finland's Ville Peltonen (#16 above, blue) is named in an article profiling the assets a special player must bring to the table when honored with his national team's captaincy.

Question: If the Flames had burned out, or the Dream in the Desert had rumbled on, is Olli Jokinen the Automatic "C" with Montreal's Saku Koivu out with an abdominal injury?

- Latvia's Karlis Skrastins has also been named captain of his country's club.

Both players are unrestricted free agents come July 1st, but an exciting time for Panther fans in that the Cats' name and logo figure to appear rather prominently on the international stage throughout the next few weeks.

Extremely difficult to discern what may be in Florida GM Jacques Martin's plans for these two, given the numerous items which must be addressed over the summer.

There is the distinct possiblity of Peltonen - the only Finland native currently on the Cats' roster - not remaining with the Panthers during their season-opening swing to his hometown of Helsinki in September/October.