Share All sharing options for: Rochester Report: goalie Shantz stops 50 in SO loss 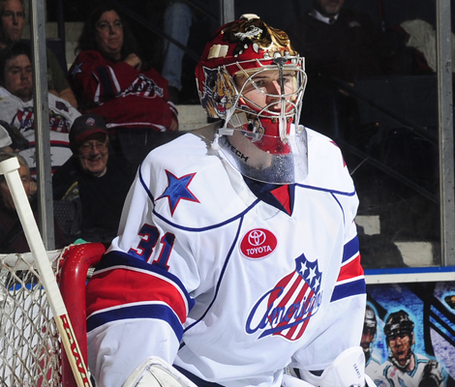 From the Rochester Democrat and Chronicle:

When David Shantz finally showed up at Broome County Veterans Memorial Arena about 10 minutes into warm-ups, leaving him just enough time to get dressed for the game, coach Benoit Groulx wasn't sure what to expect.

What he watched was Shantz, a third-year pro, play what was possibly his best game in the American Hockey League.

Pretty saavy stuff considering he barely had time to get his skates on for the game. Florida's goalie-of-the-future? Most likely not. He's bounced between Rochester, Elmira, and Dayton all season, but it's encouraging to see his confidence is rock-solid...for one night at least.

It's been a tough coming-out party for Florida's new solo affiliate.