posted by Whale4ever about 5 hours ago

On the surface, the only tangible difference right now between the Rangers and Panthers may be Sean Avery.

Of course in reality these two clubs could not be more dissimilar. Thankfully. 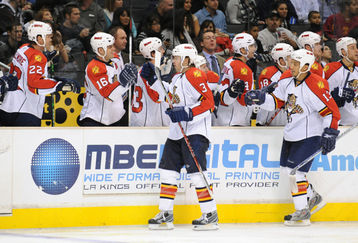 With a one-point gain tonight, the Cats will have ensured their third best season ever, but let's not get ahead of ourselves just yet...

Myself, I'm going into tonight with an air of optimism, simply because nothing's been decided yet, and may well not be until Sunday afternoon. The Cats have taken five points out of a possible six from the Flyers this year, so with a bit of courage and a tad of cockiness without being arrogant, there is a definite, tangible chance for a Florida victory.

The Flyers know what is at stake for their opponent, as well as that of their division rival taking on Montreal just up the road on Manhattan Island. Talk about confusion.

As you're most likely aware, no local TV since the Marlins have an uber-important home matchup with the Nationals tonight, and nothing in all of sport trumps the sheer primal excitement of Major League Baseball: Day Two.

For the adventurous out there, the Panthers are hosting two Watch Parties at the Carolina Ale House locations in Weston and Boynton Beach. I was at the Boynton location for the last party several weeks ago, and it was a genuinely solid effort by the club, and a good time had by all...until the final horn in Buffalo. But as good teams should always do, the Cats recovered.

Bang down the door at Broad Street Hockey and give 'em a shout. Good stuff going on up Travis' way.

And keep Blueshirt Banter and Habs Eyes on the Prize on your radar as well. No need to go into the reasons for it; you know the drill:

Granted three more Big Games remain, but who's been your Panthers MVP?