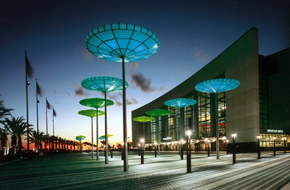 A bombshell story by Broward New Times' Trevor Aaronson from May 4th (my bad on missing it earlier) illustrates a disturbing trend among publicly-financed sports facilities and the management companies who operate them: selling access to arenas and players.

Though such an arrangement is common among season ticket holders and the like, the scenario highlighted here goes a bit deeper.

(BAC chief operating officer Michael Yormark) recently made a remarkable announcement about how a few pampered millionaires will soon get special access — including their own separate entrance — to the publicly financed arena that houses the Florida Panthers.

An event held in Broward several weeks ago - billed as a pep rally for real estate sales-types and potential buyers of units at Trump International Hotel & Tower Fort Lauderdale, with The Donald himself as guest of honor - featured Yormark unveiling a brash bold new partnership between his Sunrise Sports & Entertainment (or SSE, parent company of the Panthers and operator of the BAC) and the Trump Tower. Said Yormark:

"And most importantly, they'll be receiving gold keys to our building. They'll be treated like the owners of our facility. So we're very, very excited about this relationship, and again, those people who have purchased units should be very, very excited. And congratulations. Thank you."

Keep in mind, this announcement was made at a "private party", featuring quarter-million dollar Maybachs and diamond displays. Don't recall reading it on the Panthers' official website, do you? Similarly lacking on Yormark's own blog. Get the impression it's supposed to be a stealthy operation?

Aaronson picks up the pace:

Left out of the exciting announcement, however, was any mention of the ordinary taxpayers who had built the stadium, originally called the Broward County Civic Arena, with $212 million of public money raised through a 2 percent increase in the tourism bed tax.

A spectacular read (title: Pimp My Arena), and one that will certainly not gain Yormark any new fans, at least outside of the high-end real estate market in Lauderdale.

If there's a positive vibe to be gained from this development, it's that the Panthers (remember the hockey team at the center of this?) are continually planting roots in the area, in soil sown on a very solid lease agreement with the city of Sunrise. For whatever that's worth (see Coyotes, Phoenix). Deals like this are almost assuredly going to gain traction throughout the sporting world. The cash has to come from somewhere.

But it still takes a chunk of the "my team, my building, my community" out of the equation. Ready to be looked down on from "Trump Row" at the BankAtlantic Center? By folks with "gold keys" around their necks? It's coming.