Hockey's Future: How'd Florida do at the '04 draft?

Share All sharing options for: Hockey's Future: How'd Florida do at the '04 draft? 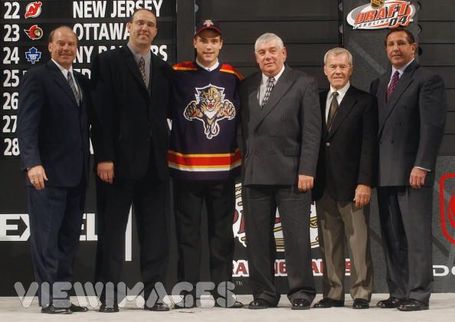 Comments and concerns regarding your opinion of the Cats' 2004 Entry Draft perfomance may be forwarded to the guy on the far left. He's available.

HF's Ian Bross breaks down what in retrospect is not one of Florida's finer moments at the draft table - with one exception among the picks who has clearly separated himself from the rest (and it ain't the guy above).

And let's be honest...barring biblical intervention, David Shantz can be safely summarized as a "bust", IMO:

That's four "busts" out of seven picks, with two "NHL players" and one (true) "prospect". Way to go, Mike.

Check it out at this here link then come on back for a poll.

NOTE: My apologies for the cut-off stats board. Still experimenting. And be sure to use the "Wide" option at the top left of the screen to expand the page. Still not enough, though.