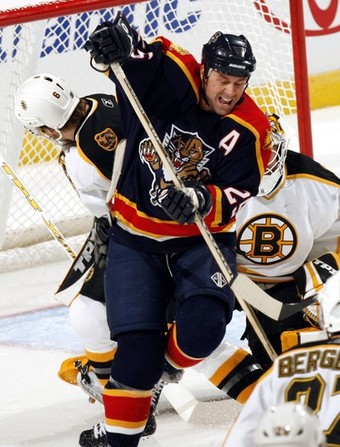 It was expected, and reasonably so, that within a few years Joe Nieuwendyk would rise quickly to the general manager ranks of the National Hockey League.

Evidently, a couple of assistant-to-the-GM positions were all the requirement necessary for the Dallas Stars to satisfy themselves, who today named the three-time Cup winner (and former Star) their newest general manager.

Former co-GMs Les Jackson and Brett Hull (we hardly knew ye!) have been reassigned, "return(ing) them to roles that fit their respective strengths", according to team owner Tom Hicks.

One shudders imagining what Hull's strength must be.

Anyway, Nieuwendyk does have a short history with the Florida Panthers, first as a player (for a paltry eighty games over less than two seasons before retiring due to injuries), then as special consultant to general manager Jacques Martin for a spell, before a successful courting by the Toronto Maple Leafs and a similar position with that club.

Cat fans will probably best remember "Nieuwy" and his famous dressing-room pep-rally of some two seasons ago: The Panthers were down going into the third period, then-coach Martin's boys lacking any whiff of energy. The final frame featured a completely different squad: fiery, driven, confident. A win was achieved (and no, I don't recall the opponent or the date, simply the night-and-day aspect).

Written up the next morning, it was discovered that Nieuwendyk had made an appearance in the "room" that night, between periods, and said something that inspired the troops. What was said is not entirely known; the end result was that it worked.

And we were pining for him to take over the coaching reins the very same day.

Alas, it wasn't meant to be - for him, or Florida. Dallas is getting a great individual who happens to be a hockey guy. The very best of luck to him.

Stars' fans: you've got a winner (but you already knew that).

Brandon at Defending Big D has all the particulars.