A sad day in Pantherland: Fallout on the Potvin dismissal

Share All sharing options for: A sad day in Pantherland: Fallout on the Potvin dismissal 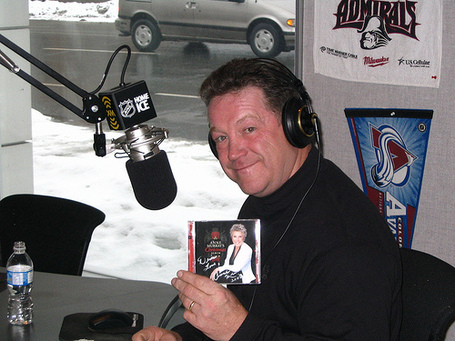 A particularly cold day in Sunrise finds now-former Florida color commentator Denis Potvin chillin' with some soothing tunes. Even Anne Murray couldn't save him. We're not in Canada anymore, Toto.

The coverage of Potvin's release is beginning to gain traction. There hasn't been an all-out NBC/Roddenberry-style letter writing campaign quite yet, but considering his tenure with the club, and name-recognition value within the league vault, the "newsworthiness" is understandable.

We'll begin with The Palm Beach Bandwagon Post (no offense Brian, we know it wasn't your decision)...

"I must say I was surprised," said Potvin, 55, a member of the Hockey Hall of Fame who had served as FSN analyst since the team began play in 1993. "I had understood the Panthers had a (new) three-year deal with Fox and just assumed I'd be a part of that. But I assumed wrong."

Denis, who has been with the Panthers since their inaugural season in 1993-94, said he found out he wouldn't be returning in a meeting with team president Michael Yormark a few hours ago. It was a quicker meeting than Denis figured it would be. He said Yormark and Pedro Goncalves, a senior vice president with Sunrise Sports & Entertainment, basically told him they were eliminating one position in the organization.

Hmmm. Onto The Miami Herald's Barry Jackson and George Richards...

``They had talked about renegotiating at a lower rate. We never got to that. . . . This is new to me. I've never been fired. I'm not done, not by a long shot. It's been an exciting, good run. . . . Once you're somewhere for so long, you think you're a lifer. But times are different now. Once they told me I was done, I walked out.''

Continuing, it would appear Panthers management were a tad concerned about ensuring their television personalities were living in South Florida year-round, as opposed to only during the regular season. Ya know, since the vast majority of Canadian snow-bird types won't connect with a hockey Hall of Famer who spends no more than ten months per year in the area.

''Denis does a great job, but we're looking for something different,'' Yormark said. ``Billy is one of the most popular players in the history of this franchise. He lives in the market, and that was very important to us. We want our broadcasters to live here 12 months a year.''

Potvin spends part of the summer in Canada ''and that was a factor'' in the decision to drop him, Yormark said.

I'm in fear of following up on a return trip to St. Lucia; might get labeled. Look, whatever the reason may have been, there's always room to revisit the program. And perhaps the program needed a shakeup. I really enjoyed Potvin's broadcasts. Listened to him on Day One. Not "since Day One", but listened on Day One.

This is a story which will continue for some time; not many clubs left in the league who can claim an employee - who happens to be a Hall-of-Famer, toting four Stanley Cups - who has been with the organization since the first telecast.