Back to reality for the Florida Panthers - Torrey, Bouwmeester, Lemaire, and more

Share All sharing options for: Back to reality for the Florida Panthers - Torrey, Bouwmeester, Lemaire, and more 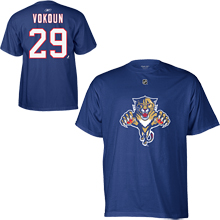 Why the sudden, dramatic decrease in price? Perhaps only Randy Sexton knows for sure...

Does the NHL Shop know something we don't?
Found today... a soon-to-be bargain bin Jay Bouwmeester #4 tee shirt: $21.99. Elsewhere on the same page, another example of the very same tee with Tomas Vokoun's #29. Price? On sale for $9.97. Huh?
Are the Panthers planning on truly heroic demand for products bearing the name/number/likeness of surefire UFA walker Bouwmeester over the next week and a half, while current (and presumably future) goaltender Vokoun's product requires more than a 50% discount to move the worthless crap off its dusty shelves?
Either the marketing department got it all backward, or perhaps just maybe something's afoot?
First rule of Panthers fandom: never waste an opportunity to engage in a juicy conspiracy.
UPDATED:  A Panthers season seat holder this evening informed The Litter Box that Tomas Vokoun, originally scheduled for a personal appearance at today's "Cats Cookout" at the BankAtlantic Center, was a no-show (he was the only player on the itinerary).
When asked for a reason why Vokoun was not in attendance, a club representative claimed a "last-minute emergency" had come up, forcing the goaltender to miss the event.
Our best to T-Vo, and Godspeed in putting the emergency to rest.
Still...

Sunrise Torrey and the Latest Crusade

The Palm Beach Post's Brian Biggane gets into the GM-search arena with a little more insight on Bill Torrey's quest to locate the perfect general manager, made all the more unique in the one demand the team will insist upon: don't even so much as dream about replacing the current coach. We're familiar with all of the names, and a few sure are complimentary of Florida's progress over the past year.

Of course, that's not the end of it. Charley Walters of TwinCities.com is hearing things as well:

Insiders say Bill Torrey, the former Islanders and Panthers GM, is heading the GM search for the Panthers and talking quietly with ex-Wild GM Doug Risebrough. A Risebrough hire could be enough to lure ex-Wild coach Jacques Lemaire to the Florida team.

Question: Is there any remotely possible way in Hades a Risebrough/Lemaire one-two punch could ever conceivably work within the Peter DeBoer offense-first system?

I'll provide the answer: Not. A. Chance.

It's looking solid as stone that defenseman Jay Bouwmeester will not be returning to Sunrise in a Cats uniform. Denying it was simply silly. The chances of Florida getting whatever may be possible for his rights at the draft? All but a certainty. Bruce (Malkin to the Kings) Garrioch goes even deeper:

"The Panthers just want to get something done," a league executive said yesterday. "They don't want to let him walk away for nothing."

But they also won't take just anything in return. The price for Bouwmeester's rights could be as high as a first-round pick.

That's a lot of information up there: Made it clear he's leaving no matter what, the Cats will trade his rights, and there could be a first-rounder involved. Booyah. Draft Night just may be interesting.

Former Americans GM Jody Gage was re-hired for an undetermined position a few weeks ago by the club after unceremoniously dumping him only days earlier. We're still not sure what he'll be doing, but the Rochester organization is glad to have him back in the fold.

The Amerks' (and Panthers prospect) Michael Caruso is profiled in another one of those nifty Our Sports Central question-and-answer deals:

Q: What do you enjoy the most about playing in Rochester?

A: I've never played with such a great group of people for teammates. It makes it very enjoyable to come to the rink every day.

He'll never be mistaken for Jeremy Roenick, but a nice kid nonetheless.

Finally, from the wonderful world of "Eklund" parodies comes this latest gem from "The Rumor Generator", just in time for the draft:

According to my sources within the San Jose Sharks organization, the Florida Panthers are willing to part with RW Radek Dvorak, D Jay Bouwmeester and G Tomas Vokoun to obtain the services of C Joe Thornton. Remember, you heard it here first!

Ever thought you were alone in believing Eklund ("the Anonymous Hockey Blogger") might be stretching the truth a bit in his predictions? You're not.