Share All sharing options for: Florida Panthers and the Salary Cap heading into Draft Day/Free Agency 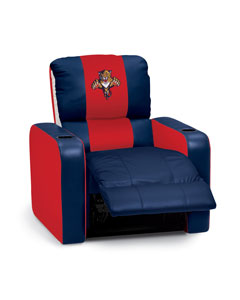 Take a seat. You'll need it.

Now that the first trade of the offseason has gone down, thought it might be high time for a look at Florida's salary cap situation going into the Entry Draft/Free Agency period.
The 2009-10 "Cap" and "Floor" have not yet been released; these will be published next week. Going by NHLSCAP.com, we'll use current numbers:

While Randy Sexton and his Sunrise Warriors ponder their opportunities over the coming weeks, we'll take a peek at where the Cats are - on paper - and what it may mean for the direction of the club. Simply for informational purposes.
Warning: Lots Of Numbers alert!  More after the Leap of faith...

Florida Panthers forwards under contract for 2009-10 (total cap hit: $20,753,333):
CENTERS
For a club so routinely deemed thin at center ice, fully seven of ten signed players are listed as centers (eight of ten if Horton's thrown into the mix; thankfully we're told he won't be).
Reinprecht is being hailed as a second-liner; does this imply Weiss is the number one? At 26 years old, it's well past time for him to Do It. His numbers were up across the board last year, but a leap to 85 from 61 points is where he needs to be. If the middle position is now set in stone, the burden is clearly on the the longtime Panther's shoulders.
Beyond Weiss and Reinprecht, Greg Campbell should remain a fixture on the third line, while Kamil Kreps and Rochester's Shawn Matthias can be expected to scrap for the fourth spot. My money's on Matty to have an impressive premier season.
Jonesed: McLean, Tarnasky, Stewart.
WINGS
Uber-Pantera David Booth's salad days are soon behind him. The $22,580 spent on each of his 31 goals in 2008-09 are going to be hellaciously more expensive in the coming year. Completely guessing, but would a five-year deal with an average cap hit of $4.8M and loads of incentives be unrealistic? Whatever the outcome, Booth is the future of the Florida Panthers, and will remain on the top two lines for a long time to come. Horton's enigmatic play is another matter, as is (35 year-old) Stillman's declining production. No matter, they'll be used and used a lot. Frolik? Good to go. Olesz? Who knows...he's criminally overpaid, but could he finally shake the demons and be that top-ten pick? Michal Repik is going to give someone in camp a scare. UFA Radek Dvorak will probably be retained for his defensive capabilities (younger than Peltonen) but only at far less than last year's $1.55M.
Jonesed: Zednik, Peltonen.
Florida Panthers defensemen under contract for 2009-10 (total cap hit: $12,850,000):

Steve Eminger - who only got a cup of coffee with the club after the trade deadline - is an RFA, but there's no reason to suspect he will not be retained at or near the $1.2M he received in 2009. He was Tampa Bay's number one defenseman during his time in that city, and was a top four in Washington for several years before the ascension of Norris Trophy snub Mike Green.

As for the others under contract, we know them well, and what to expect from a better-than-average core. McCabe's the quarterback, Ballard the puck-mover, and Allen the stay-at-home. There will be trepidation going into camp with Allen, of course, having played the better part of only two games at the start of last season. He's a pro: he knows the drill.

Filling the other three spots could prove tricky maneuvering. I've been a fan of Karlis Skrastins since the day he arrived here 18 months ago, and he's been a steady force behind outgoing Jay Bouwmeester, but there's the quandary: did Skras' natural abilities complement Bouw, or was Jay just that much better, covering deficiencies we wouldn't otherwise see? I tend to side with Skrastins being a much more complete player than he's given credit for. He was the NHL's ironman, not too long ago, so you'll get what you pay for. Is he worth $2.4M as a fourth or fifth defenseman? There's the question.

Nick Boynton's situation with the club has been covered a hundred times. It's safe to assume - no matter what's been said publicly - that Coach DeBoer will not be welcoming him back in September. And there are close to three million rea$on$ why. Rapidly aging but rock-steady Jassen Cullimore - is a phenomenal bargain (less than $1M) as a sixth or seventh defenseman, but is this a spot which should be fought for by the likes of Keaton Ellerby and Jason Garrison? Perhaps Cullimore is the perfect partner for one. In any event the Cats will be looking for the services of at least one top-four D-man this summer.

And now we come to the Panthers' personal "Bay of Pigs": goaltending. UFA Craig Anderson was undeniably the best performance-per-dollar player in the National Hockey League last season. At $550,000, his 15-7-5 and three shutouts were spectacular stats. He's due a very considerable raise, and has voiced his desire to become a starter. Somewhere. Two year deal for $3.5M? Who knows. What we do know is he will not be returning to Florida as a backup.

Veteran Tomas Vokoun remains one of the game's great netminders, but he slid down the strech and was unable to convey any sort of confidence among those playing in front of him; there were rumblings the team was just flat-out "better" with Andy in net. T-Vo lost several games which his club had already ostensibly "won" for him late in the season, though ended with 26-6-6 and six shutouts. That's not even close to a lost cause. But give Anderson 60+ starts and the team will be rolling the dice...the payoff may be grand, and far less expensive.

Florida will have a new secondary no matter what, though no one in the system is up to the task beyond Andy, unless a heroic jump in progress is made by either Tyler Plante or Chris Beckford-Tseu. Don't count on that happening. Not now, probably not ever. David Shantz is cooked as a UFA, so count him out. Only European super-rookie Jacob Markstrom is on the horizon, and that remains a year away.

Digging a bit deeper, here's the story from Rochester/Florida (ECHL):

Rochester Americans forwards under contract for 2009-10:
Restricted Free Agents likely to be retained:

So Panthers fans: only a few days left for some of these guys in Florida's system. Which should make the cut? Who shouldn't? And which players from around the league should be targeted by the club? Let's have your opinions on this always-traumatic time for fans, players, and management alike. Where do the Cats go organizationally?